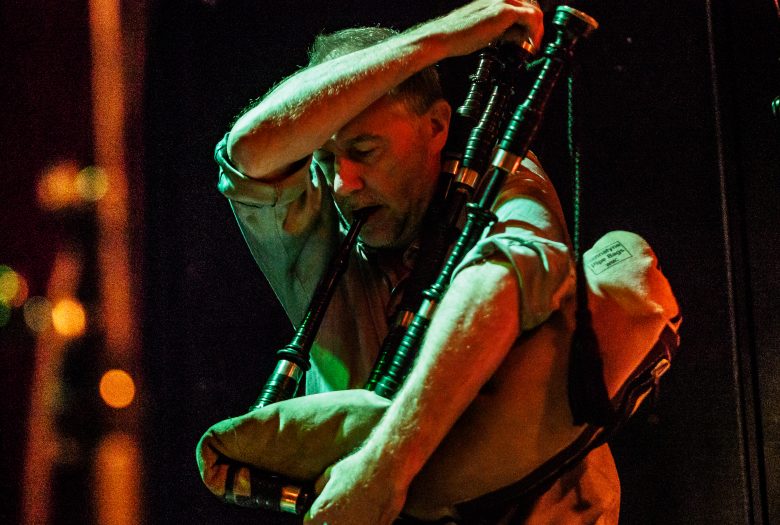 David Watson and Tommy Burke met and started improvising together almost 30 years ago in a loft concert in Brooklyn. The two Antipodeans have shared stages in many parts of the world since then, their music conversation surviving changes in times and instruments. Last year saw the release of their LP Ask the Axes (Besom Presse) and their trio with Lee Ranaldo released On Jones Beach (Three Lobed). For this concert, they will be joined for the first time by Che Chen of 75 Dollar Bill, on violin and assorted instruments.

As an experimental musician, David Watson is drawn to combinations of order and disorder. A guitarist, bagpiper, and advocate for intelligent listening, his work encompasses improvisation and composition in a wide variety of contexts. Originally from New Zealand, he has lived and worked in New York City since 1987. He has worked intensively with a wide range of extraordinary artists, including Chris Abrahams, Robert Ashley, Frisner Augustin, Marcia Bassett, Tony Buck, Che Chen, Anthony Coleman, David First, Alastair Galbraith, Frode Gjerstad, Shelley Hirsch, Samara Lubelski, Chris Mann, Christian Marclay, Sean Meehan, Ikue Mori, Bill Nace, Andrea Parkins, Lee Ranaldo, Talibam!, Yoshi Wada, Alex Waterman, John Zorn, 75 Dollar Bill, amongst many others. His bagpipe work has created a new vocabulary for the instrument. His album for composer Phill Niblock’s XI label Fingering an Idea was described in The Wire as, “shimmering lines piling-up like an old Terry Riley piece.” While his record Throats, on Thurston Moore’s Ecstatic Peace label, was described by Volcanic Tongue as “brain rearranging massive walls of constantly shifting drone.” Recently, Niblock created a new piece “Bag” using his playing as source material. Watson is in the trio Glacial, an ongoing collaboration with two highly acclaimed partners, Lee Ranaldo and Tony Buck. Watson’s guitar playing was for many years a staple in performances of John Zorn’s seminal piece Cobra. Watson founded and organizes the New York City music performance series WOrK which has presented over fifty concerts since 2015 and is predicated on exploring what experimental means to practitioners today.

Percussionist Tommy Burke is one of the most sought after musicians in Europe. Burke has played / toured / recorded with John Zorn, The Ex, Lee Ranaldo, Phil Minton, Evan Parker, Tom Cora, Clifford Jordan, and Otomo Yoshihide among many others.

Che Chen is a musician, composer, and multi-instrumentalist based in Queens, NY. Born in 1978 to Taiwanese immigrant parents, Chen studied visual art before turning his attention to sound and music. He is primarily interested in modal, free and other forms of improvisation, untempered tuning systems (just intonation), and the physical properties of sound. In 2012 Chen and percussionist Rick Brown founded the group for which he is best known, 75 Dollar Bill, in which he plays electric guitar. While principally a duo, 75 Dollar Bill’s ecstatic, modal sound frequently manifests itself as larger groups comprised of players from a growing circle of friends/collaborators. Though mostly a self-taught musician, Chen took a two week crash course in the Moorish modal system with Jeich Ould Chigaly in Nouakchott, Mauritania in 2013, an experience to which his approach to guitar is deeply indebted. He also considers his first band, True Primes (with Rolyn Hu), and playing in groups led by Tony Conrad, Tori Kudo (Maher Shalal Hash Baz), and Chie Mukai (Ché-Shizu) essential parts of his musical education. He also runs the record label, Black Pollen Press and organizes the “Fire Over Heaven” concert series at Outpost Artist resources in Ridgewood, Queens.