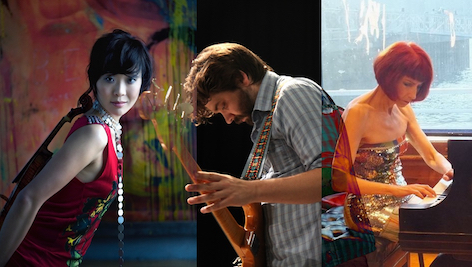 Roulette’s Winter season will be presented virtually and available for free on a variety of streaming platforms. Our theater is currently closed for public performances as a result of the Covid-19 pandemic and the safety measures that Roulette has put in place to keep staff, artists, and the public safe.

Jennifer Choi has charted a career that breaks through the conventional boundaries of solo violin, chamber music, and improvisation. She has performed worldwide in venues such as the Library of Congress in Washington D. C., the RAI National Radio in Rome, Hong Kong National Radio, and the Mozartsalle in Vienna since giving her debut recital at Carnegie Hall’s Weill Hall in 2000.  An award-winning chamber musician, Jennifer has performed at the Chamber Music Society of Lincoln Center, The Metropolitan and Guggenheim Museum of Art, MOMA Summer Garden Series, Ravinia Festival, Barge Music, Caramoor Music in collaborations with groups like Either/Or, ETHEL, and ECCE. She has given numerous world premieres of solo and chamber works by John Zorn, Jacob TV, and Helmut Lachenmann and can be heard on over a dozen albums for TZADIK record label,  New Focus Records, New World Records, Starkland labels.

James Moore is a versatile guitarist, composer, and bandleader. A native of the San Francisco Bay Area, he has been active on the East Coast since 2004, earning the titles of “local electric guitar hero” by Time Out New York and “model new music citizen” by the New York Times. James is a founding member of the electric guitar quartet Dither, the acoustic quartet The Hands Free, and the avant-grunge band Forever House. He has worked with a wide array of artists including playwright Richard Maxwell, choreographer Susan Marshall, vocal ensemble Roomful of Teeth, and composers Robert Ashley, Eve Beglarian, David Lang, Pauline Oliveros, and John Zorn. Currently pursuing his PhD in music composition at Princeton University, James writes music for an eclectic community of collaborators from the classical, folk, jazz, rock, and experimental music scenes.

“What Ms. Supové is really exploding is the piano recital as we have known it, a mission more radical and arguably more needed.” (Anthony Tommasini, NY Times) In 2012, Kathleen Supové received the John Cage Award from ASCAP for “the artistry and passion with which she performs, commissions, records, and champions the music of our time.” Ms. Supové annually presents a series of solo concerts entitled THE EXPLODING PIANO, performing and premiering works by a Who’s Who of contemporary music. The Exploding Piano is a multimedia experience using electronics, theatrical elements, vocal rants, staging, collaboration with artists from other disciplines, Yamaha Disklaviers, laptop orchestras, robots, and XReality. Upcoming projects include MIGRATION. Her latest solo recording is EYE TO IVORY, Starkland label. Ms. Supové has now received a number of commissions and two ASCAP Plus Awards as a composer. Visit www.supove.com or follow on Facebook (Exploding Piano).