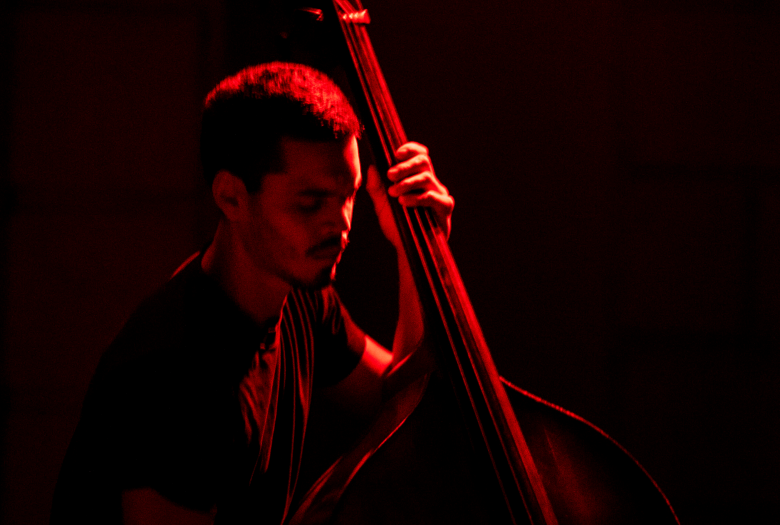 Brandon Lopez is a 2020 Resident Artist

In the second performance of his year-long Roulette residency, composer and bassist Brandon Lopez plays a solo performance and duet for the first time with trumpeter Greg Kelley. Known for the intense physicality of his performance and avant-garde playing, Lopez’s concerts at Roulette center on interrogating and often unraveling the structures of composition and performance.

Brandon Lopez is a New York-based composer and bassist working at the fringes of jazz, free improvisation, noise, and new music. His music has been praised as “brutal” (Chicago Reader) and “relentless” (The New York Times). From the New York Philharmonic’s David Geffen Hall to the DIY basements of Brooklyn, Lopez has worked beside many luminaries of jazz, classical, poetry, and experimental music, including Fred Moten, John Zorn, Okkyung Lee, Ingrid Laubrock, Tony Malaby, Tyshawn Sorey, Bill Nace, Chris Potter, Edwin Torres, Tom Rainey, Cecilia Lopez, Sun Ra Arkestra, Susan Alcorn, Mette Rasmussen, and many others. His most recent highlight performances include opening the 2018–2019 season of the New York Philharmonic as a featured soloist in Ashley Fure’s Filament and a number of works with John Zorn, including the Zorn’s 35th anniversary of Cobra. Lopez has been a 2018 Roulette Van Lier Fellow, 2018 Artist-in-Residence at Issue Project Room, and is currently a 2020 Roulette Resident Artist.

Trumpeter Greg Kelley is an improviser whose work, both in solo and group contexts, usually features quiet explorations of the extended technique of his instrument. Often, his playing sounds so alien that it’s hard to tell he’s playing a trumpet at all. After studying at the Peabody Conservatory in Baltimore, Kelley moved to Boston, where he made his recording debut with nmperign in 1998. Nmperign’s second album followed in 1999, and in 2000, Kelley began releasing a series of recordings for solo trumpet, including Trumpet and Empty Gestures. Since 2000, he has performed with Masashi Harada, Anthony Braxton, and James Coleman. In 2001, Boxholder Records released The Ilya Tree, a quartet record that featured Kelley playing extroverted free jazz with the fiery saxophonist Paul Flaherty. Also in 2001, he performed on an album by nmperign and a duo record with electronic musician Jason Lescalleet. His 2002 releases included a solo album entitled If I Never Meet You In This Life, Let Me Feel The Lack, a trio disc with Flaherty and Chris Corsano, and a series of albums with both nmperign and fellow trumpeter Axel Dörner.