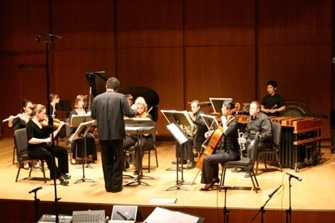 Created by composer John Lessard in 1986, the Premieres! series has commissioned works by a wide array of composers from the U.S. and abroad in the past 20 years. This year’s concert features new works by Mark Applebaum, Cindy Cox, Stephen Taylor and Stony Brook’s own Dan Weymouth.

Stephen Taylor’s Writhe attempts to ‘sonify’ an extremophile – a tiny organism that can live only in extreme environments, like the hot springs of Yellowstone. “Writhe,” which refers to twists and knots in DNA, translates the genetic structure of a protein – reverse gyrase, found only in extremophiles – into music.”

The entwined and enwoven puzzle pieces of Cindy Cox’s Hishuk ish ts’awalk builds a space full of echoes, noises, and silence. Inspired by a wild Canadian temperate rainforest, the ensemble of clarinet, strings, and piano evokes a resonant, forceful, yet fragile musical ecosystem.

Daniel Weymouth: Brief Moments of Clarity
You turn a corner; you catch a glint of sunlight; you read the world’s more perfect sentence, and suddenly—all too briefly—it is all just so clear. By turns explosive, agitated, tender, confused, heartbreakingly sweet, this piece for two pianos and percussion explores those moments when we experience that which lies below this life of ours.