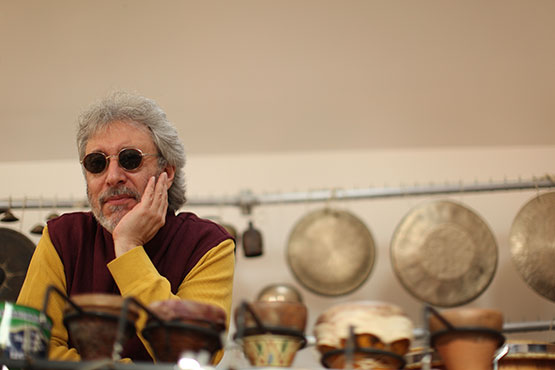 “This is it. Percussionist Adam Rudolph has been watering Go: Organic Orchestra for several years, and it keeps growing. The concept combines Rudolph’s lush harmonies and vivid structures as he conducts his large semicircle of players via cue scores and hand signals to produce a surging, shifting sound with plenty of room for individual spark.” (Greg Burk, LA Weekly)

“Those attending the Venice (California) concert got a sense that something great was transpiring. The music, performed by a large ensemble of wind and percussion players, rose like vines from hand drummer Adam Rudolph’s written instructions and hand signals. And it is truly organic – a blend of gentle sustained dissonance, heaven-crashing rhythm jams, and individual improvisations. No joke: a startling and involving development in roots music, with more to follow.” (LA Weekly)

The music of Go: Organic Orchestra is inspired by observing and reflecting upon the elements and qualities of nature. The invention of the notation/conducting system grows out of Rudolph’s ongoing desire to experiment with new creative processes. In concert, the conducting is performed in service of the moment; that is, listening and imagination inform the unfolding of musical gestures. The musicians are called upon to bring forth their ideas and experiences. The group is the winner of the LA Weekly Music Award for an Outstanding World Music Artist (2003 & 2005.)

Originally from Chicago, composer and hand drummer/percussionist Adam Rudolph has appeared at festivals and concerts throughout North & South America, Europe, Africa and Japan. In 1988 Rudolph began his association with the legendary Yusef Lateef, which lasts to this day. He has recorded fourteen albums with Dr. Lateef and has performed worldwide with Dr. Lateef in ensembles ranging from their acclaimed duo concerts to appearing as guest soloist with KÃ¶ln, Atlanta and Detroit symphony orchestras.

Since the 1970s Rudolph has been developing his unique syncretic approach to hand drums in creative collaborations with many masters of cross-cultural and improvised music such as Sam Rivers, Pharaoh Sanders, L. Shankar and Fred Anderson. He especially is known for his innovative small group and duo collaborations with Don Cherry, Jon Hassel, Wadada Leo Smith and Omar Sosa. Since 1992 Rudolph has lead his own performing ensemble, “Adam Rudolph’s Moving Pictures,” featuring drummer Hamid Drake, Ralph Jones, and Venice-based Butoh dance innovator Oguri. The group has performed in both Europe and the United States, and has released several CDs featuring Rudolph’s compositions. In 1995 he premiered The Dreamer, an Opera based on Friedreich Nietzsche’s Birth of Tragedy.

In 1990 he was commissioned by the LA Festival to create and lead Vashti Percussion Ensemble with percussionist masters from Bali, Iran, India, Lebanon and Java. The ensemble still performs annually. In the 1980s Rudolph was artistic director of “World of Percussion” under the auspices of World Music Institute at Symphony Space (NYC.)

In 2001 Rudolph founded Go: Organic Orchestra, a 22-piece woodwind and percussion ensemble dedicated to developing his unique compositional and rhythmic concepts in a large group format. In concert, Rudolph improvisationally conducts the ensemble using his own innovative process. The group has recorded three CDs to date.

Adam Rudolph is known as one the early innovators in what is now called “World Music.” In 1977 he co-founded The Mandingo Griot Society with Gambian Kora Griot, Foday Musa Suso, one of the first bands to combine African and American music. In 1988, he recorded the first fusion of American and Gnawa (Moroccan) music with Sintir player and singer Hassan Hakmoun. From 1998 to 2001 Rudolph performed at the Festival D’Essaouira in Morocco in collaboration with many leading Gnawa Maleems (masters.) For two of those years he was artistic director and curator of “Calling Across the Water” an acoustic collaboration between American, Bambara and Gnawa musicians at that festival.