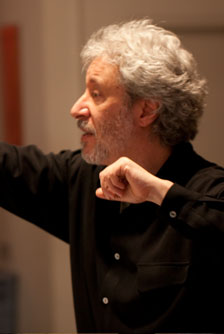 Unique in the realm of approaches to improvisational conducting, Go: Organic Orchestra utilizes a composed non-linear score consisting of sound and motion elements. These include tone rows, synthetic scales, melodies, linguistic shapes, intervallic patterns, textural gestures, modes, ragas, maqams, and plainchant. The score serves to provide material for both the improvisations and the orchestrations. Motion and forms and are generated through the application of the composer’s rhythm concept “Cyclic Verticalism” whereby polymeters are combined with additive rhythm cycles.

In concert, the composer conducts the musicians in a spontaneous way by using a variety of hand signals to cue and orchestrate the score and direct the improvisations. He seeks to generate unusual relationships of sound against sound, form against form, and rhythm against rhythm in a non-linear, ever shifting kaleidoscope of music images: weaving an “audio syncretic music fabric”.

The music is “organic” in the sense that the compositions and conducting serve as inspiration and context for the musicians to express themselves in the moment by using their instruments as an amplifier for their inner voice. Through listening and imagination the conductor and performers inspire one another to create emotional colorations of sound.

Rather than the score being a set of instructions of what, how and when to play, the non-linear semiotic (symbols) of the written music are an invitation to discover the potentialities of what can happen when transformed into syntax as expressed through the hands and breath of a group of virtuosic, imaginative, and soulful improvisers.

” I caught a performance Go: Organic Orchestra down in SoHo last spring and was swept away by what they were doing. It was fascinating and ahead of its time, in the best possible way. I loved every minute of it. ” – Marc Meyers, jazzwax.com

” I was fortunate to have attended two nights with Adam Rudolph’s Go: Organic Orchestra at Roulette a few months back and was blown away by Adam’s distinctive blend of jazz and world music as well as his conducting.” – Bruce Lee Gallanter – Downtown Music Gallery

“The music, performed by a large ensemble of wind and percussion players, rose like vines from hand drummer Adam Rudolph’s written instructions and hand signals. And it truly is organic — a blend of gentle sustained dissonance, heaven-crashing rhythm jams, and individual improvisations. No joke: a startling and involving development in roots music, with more to follow.” – Greg Burk, LA Weekly