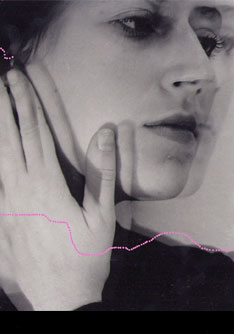 Berlin-based Italian sound artist and performer Alessandra Eramo will present her intuitive, non-narrative musique concrète collage, to move beyond the sound into the more visceral layers of poetic expression. With distinctive vocalisations, lautpoesie eruptions and dynamic use of analogue electronics, she investigates sound and its relationship to real and imaginary territories, challenging concepts like “identity”, “intimacy/fragility”, “unexpected/unknown”, therefore the concept of “noise”.

“For Alessandra Eramo, music is not so much a universal language crossing borders of culture, tradition and education.  Rather, it represents the communication tool best suited to express universals – hidden truths, archetypes and, to put it in her own words, “archaic memories” shared through intuition, spirituality and the passing down of knowledge from one generation to the next (…)” Tobias Fischer, Tokafi

Alessandra Eramo (1982, Taranto, Italy) is a sound artist, performer and researcher based in Berlin, working in the area of extended vocal techniques, sound-and visual poetry. Her research is mainly focused upon the interferences between Sign and Voice: writing and sign in its multiple forms, and the human voice as a multi-faceted instrument.  Her works include text-sound compositions, participatory performances, videos, music for theatre and dance, installations that were exhibited and performed internationally, among others, at: International Art Exhibition Venice Biennale 2011 / Sonic Circuits Festival Washington DC / Lyd & Litterature Festival Aarhus / Festival Bandit’ Mages Bourges / Harvestworks New York / Wizytujaca Gallery Warsaw / Italian Culture Institute Stuttgart / Galerie Haus am Lützowplatz Berlin. Since 2010 she’s co-founder of the vinyl & sound art production Corvo Records in Berlin, where she has also co-released the LP ‘Popewaffen’ and her solo LP ‘Come ho imparato a volare’. She has worked and performed among others, with Gino Robair, Marta Zapparoli, Seiji Morimoto, Fred Frith, Phillip Greenlief, David Fenech.  She has trained in classical singing and piano since an early age. She studied Visual Arts and Performance at the Academy of Fine Arts Brera in Milan (Italy) and in Stuttgart (Germany). In 2006 she holds the Master Degree at the Faculty of Philosophy and Science Theory of Ca’ Foscari State University, Venice (Italy).