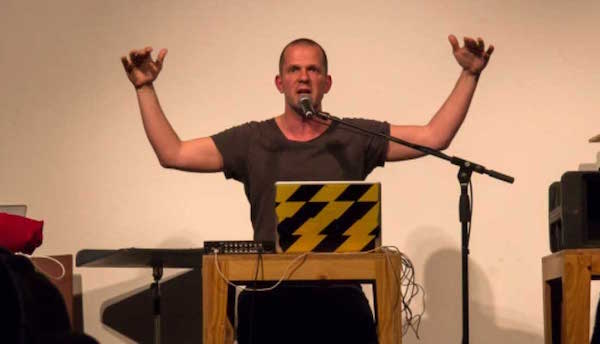 “Idiosyncratic and radical” (The Wire) composer, saxophonist and sound artist Alessandro Bosetti works with the musicality of spoken words, unusual aspects of spoken communication and produced text-sound compositions featured in live performances, radio broadcastings and published recordings. In his work he moves along the line between sound anthropology and composition, often including relation, translation and misunderstanding in the creative process. Field research and interviews often build the basis for his abstract compositions. He has given performances in all European countries, the USA and Japan. His works has been broadcast and recordings released in Germany, Spain, France, Italy, New Zealand and the USA. He lives and works in Berlin.

About tonight’s concert, he writes: “What I do could be roughly reminiscent of songs. Kind of almost spoken, abstract songs. I usually use my voice and a laptop, and then project the sound produced around the audience. During the concert I wear headphones. I consider headphones very poetic objects. I receive signals through the headphones and I try to react to them. Often I misunderstand them. Often I can’t really control what I sing because the headphones separate me from the environment. I sing-as an untrained, passionate singer-and I speak-I don’t play the saxophone here, for anybody who might ask. It’s not a “project” as much as it is a live performance, changing every evening, though still featuring a lot of hidden conceptual issues. Voice, language, misunderstandings, sound-anthropology, relational aesthetics, tone languages, conversations, headphones, geography, unspoken languages, feedback (in behavior and physics), interview, no control, handicap, imitation and mimesis all are favorite themes for me. They are all somehow there. I make music out of conversations that I’ve had, the people I’ve met. Often they were wearing headphones and I was having them listen to something. When it’s taking place you are not listening with them because of the headphones that cut you out. But you can listen to their reactions. They often misunderstand too. That’s OK for me.”