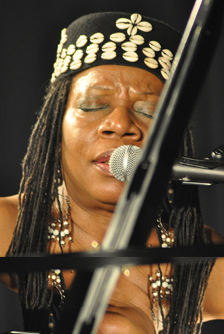 A pioneer, a virtuoso, and a legend, Amina Claudine Myers has paved a musical career that embraces jazz, blues, classical, gospel, and world music traditions while maintaining an unmistakable voice on piano, as a vocalist, and as a composer of the highest order. In a special intimate concert, Myers surveys her extraordinary career and songbook, along with selections from her new CD Augmented Variations (on Blue Music Group), in a solo piano and vocal performance: a journey through through the past and into the future through reflection, reinterpretation, and renewal of the creative fire and spirit.

Born in Blackwell, Arkansas, Amina Claudine Myers, raised on gospel and blues of the South, quickly earned her musical chops and respect under the tutelage of Muhal Richard Abrams in the 1960s, and shortly became a member of the The Association for the Advancement of Creative Musicians (AACM). In the late seventies, Myers toured in The Lester Bowie Quintet and The New York Organ Ensemble across Europe, Asia, and the United States, and performed alongside Archie Shepp in an historic performance in Cape Town, South Africa at The North Sea Jazz Festival. Additionally, she has collaborated and performed with the likes of Bill Laswell, Charlie Hade, and James Blood Ulmer, among others. Myers has received several grants from the National Endowments for the Arts, Meet the Composer, and New York Foundation for the Arts.
augmented.bluemusicgroup.com