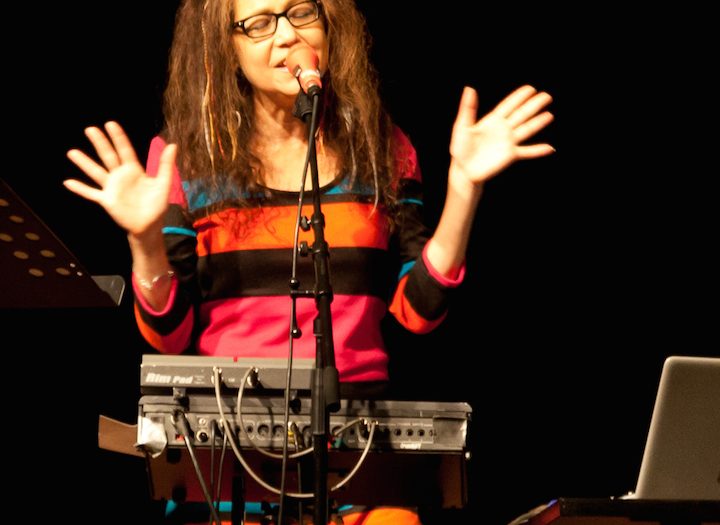 The oddly entertaining and often humorous ‘avant-cabaret’ songs of Amy X Neuburg combine her interests in poetry and theater, expressive use of music technology, and exploration of multiple genres using the many colors of her four-octave vocal range. She has performed at venues as diverse as the Other Minds and Bang on a Can Festivals, the Berlin International Poetry Festival, the Wellington and Christchurch Jazz Festivals (NZ), colleges, rock clubs and concert venues at home and abroad. As composer, her many commissions include works for chamber ensembles with and without live electronics (Robin Cox Ensemble, Present Music, Santa Cruz New Music Works, Solstice vocal ensemble, Christchurch Arts Centre chorus), as well as numerous works for theater, visual media, and modern dance. As vocalist Amy specializes in contemporary performance; she toured Europe and Japan with Robert Ashley’s operas, sang the leading role of Simone Weil in Guillermo Galindo’s “Decreation,” and played in a long-running musical with Culture Clash. Her current focus is her new ensemble The Cello ChiXtet, with whom she is now recording her song cycle The Secret Language of Subways for voice, three cellos and live electronics.

Steve Espinola (Brooklyn) has been a long-time member of NYC’s Anti-Folk community as a songwriter, singer and pianist. He is an obsessive collector and rejuvenator of discarded, rare and archaic music technologies as well as an instrument builder and healing-music practitioner

“(A) wonderful performer-composer… Her songs channel the rhythms of urban life through the seriocomic sensibility of a born entertainer”¦ a delicate balance between sauciness and depth”¦ Neuburg’s musical inventiveness proves a delight throughout. — Joshua Kosman, San Francisco Chronicle

“Neuburg is a new kind of multi-threat composer”¦ a wonder of sampling, overdubbing, and electronic manipulation of live sound, a fabulous singer”¦ exhilarating originality. Nobody else sounds like Amy X. Some of the most compelling music being made today.” — Tom Strini, Milwaukee Journal Sentinel