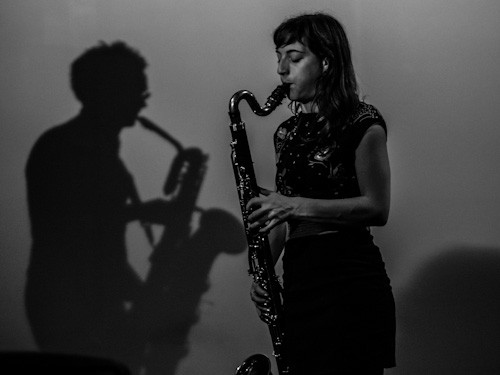 For the past year and a half, Lea Bertucci and Ed Bear have been developing a performance piece based on Ravel’s Sonata for Violin and Cello (Opus 23). A marked departure from Ravel’s previous work, the piece carries the weight of the composer’s experiences in World War I and is informed by Serialist compositional technique. They are adapting Ravel’s composition in terms of structure and timbre for bass woodwinds, utilizing extended technique and electronics to abstract the form and melodic movement. The quality of the abstraction will be informed both by their own tastes as well as an attempt to understand the significance of the piece as a post-traumatic reaction to modern warfare. An integral part of this performance includes a collage of live projected images over constructed forms by Anastasiya Osipova. The imagery explored will draw the space and audience into the performance and make overt and oblique reference to the trauma and industrialization of war. The quality and content of the images will subtly illustrate the music’s abstract and representational tension.

Expanded projections using 35mm slides focus on the constitutive components of the cinematic experience. Multiple projectors are employed to create motion without obscuring the real process and technology used. The Bass Clarinet and Baritone Saxophone are acoustically married to each individual venue through electronic feedback. . Timbral explorations of each instrument occurring as improvised and composed harmonic structures are electronically abstracted. Because both the projections and sound are tied to the performance environment, the structure of the music intertwines with that of the projections. The creation of an immediate awareness of space aims to break the antiquated barriers between performance and audience and realize the innate human potential of sound and light as energy and information.

Nastya Osipova – ‘Cannibals starve in the white nights, such is the disaster: the night lacking darkness. Needle shines above revolving shadows. Hunger, desire: to employ whips and flashes.’ Nastya O. hopes that the future is not too bright. She is an experimental projectionist and lives in Brooklyn, NY.

Lea Bertucci is an interdisciplinary artist based in Brooklyn NY who works with photography, video and sound. She is a 2007 Tierney fellow and has received a degree in photography from Bard College. She has over a decade of classical and jazz training on various woodwind instruments and has in the past few years approached the Bass Clarinet with more experimental, electro-acoustic leanings. Visit www.twistycat.org for more info.

Ed Bear is a musician, engineer and teacher working with found electronics, video, and collective improvisation. He has toured extensively in North America and Europe as a former member of the group Talibam!; performing at venues such as Issue Project Room, Free103Point9, Tonic, The Montreal Pop Festival, Oberlin Conservatory of Music, Duke University. As an educator and artist, his workshops aim to technologically empower artists as both scientists and magicians and promote ecologically sound alternatives to modern electrical power systems and electronic devices. Visit www.twistycat.org for more info.