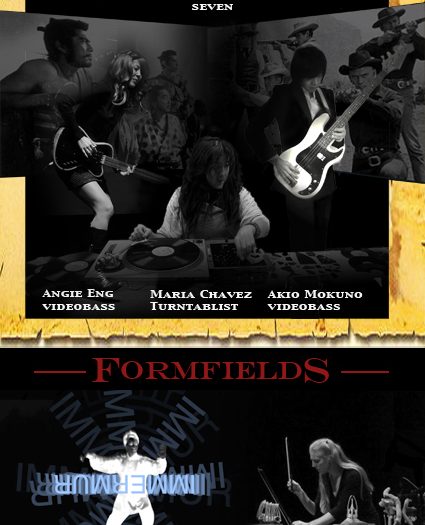 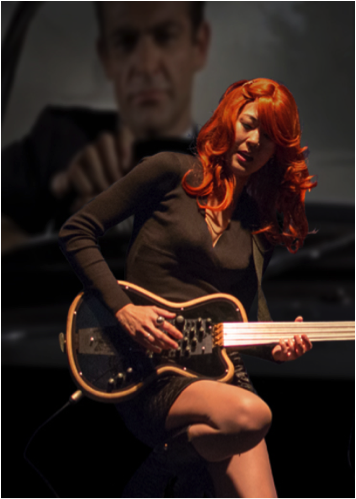 Angie Eng returns from Paris to premier two very distinct video performances: ‘Formfields’ is a multimedia performance based upon energy fields; ‘Chasers’ is a Videobass band that resamples cult and classic films into visual gestures. 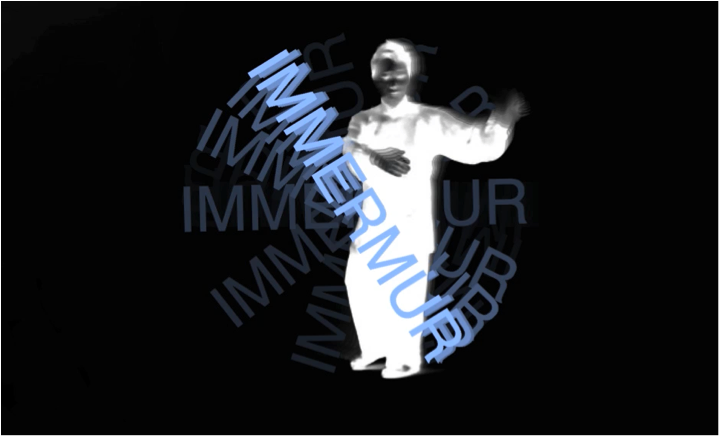 ‘Formfields’  is a multimedia performance directed by visual artist Angie Eng in collaboration with musician Cheryl Leonard and Sifu Tzyann Hsu and her practitioners from the Brooklyn Academy of Kung fu/Tai chi. Inspired by visualizing the invisible, Eng projects drawn line and word as digital qi-ripples  onto a dozen martial arts performers. Qi  defined as vital force or energy flow is a mystery for westerners rooted in materialism.  With the optics of our eye we can not see qi, like other energetic phenomena such as, auras, halos, or vibes. However, in ‘Formfields’  a visual morphic field of energy is projected onto the performers.

The 25-minute form is divided into five sections of the five Chinese elements: fire, earth, metal, water, wood.  Line and portmanteaus (word combinations) serve as basic qi gestures. When digitally processed phantom traces encircle and radiate from the practitioners. Like in many of Eng’s projects, repetitive movement serves as her character expression as punctuation to direct attention.

Chasers is an AV band with video bass players, Eng and Mokuno who remix international cult and classic films that are either copies, remakes or origins of inspiration of one another. They are not just jogging our memories of stories retold. They adopt a sampling technique of visual rhythms and gestures to seduce the audience to experience cinema beyond their narrative. Neither just concert nor film screening, Chasers is an event of double scenarios radically reduced to analyze the crossover of one culture to the next, one epoch to another. They will mix the pairs of films: Seven Samurai with Magnificent 7, James Bond Dr. No with 0SS-117 Rio ne repond plus and Max Linder with Charlie Chaplin. Guest turntablist, Maria Chavez creates an abstracted soundscape from the dialogue and sound tracks of each film.

Angie Eng is a visual artist who works in video, installation and time-based performance. In 1993 she moved to New York City from California to soon discovered experimental live video. Since then her video performances include a variety of themes and styles borrowing from early 20th century filmmakers, 1960’s experimental video scene, abstract expressionism and symbolism. Known for her peripathetic artistic approach and fearlessness to mix traditional with new media, her work can range from formalist to conceptual, process-based and a combination of the aforementioned.  Like many visual artists she concentrates on expanding the definitions of seeing and perceiving.

Glass shards and pinecones, glaciers, boxspring mattresses, a flock of accordions, circular saw blades, viola, the erhu, hyenas and whales and elk, Cheryl Leonard’s music finds its raw materials just about anywhere. From these diverse sources come works that embrace the spectrum of musical possibilities: improvised to composed, acoustic to electronic, diaphanous to bombastic, notes to noise. Over the last decade Cheryl has focused on investigating sounds, structures, and objects from the natural world. Many of her recent works cultivate stones, wood, water, ice, sand, shells, feathers, and bones as musical instruments. Her projects often involve constructing one-of-a-kind sculptural instruments that are played live on stage. She is particularly interested in collaborating across artistic disciplines and developing site-specific works.

After exploring psychedelic/new wave bands in Nagoya, in 1994, Akio Mokuno moved to New York and joined the post-no wave/noise band Electoputas as a bass and voice performer. Upon arriving to New York he was  inspired by musique concrète and electronic music. Akio uses various extended techniques with multiple effects to give sound an electronic timbre. He uses the bass guitar as an acrobatic tool to make dramatic movements and create massive percussive sounds.  After receiving his masters from Brooklyn College’s interdisciplinary arts program, PIMA, Akio expanded his skillset to include visuals in his music performances.  For this evening Akio will be playing his bass, however his instrument will be transformed into a video controller to collaborate as a video bass player in Eng’s videobass band, ‘Chasers’.

Born in Lima, Peru, Maria Chavez is recognized as an improviser, sound artist and curator. Her sound installations, visual objects and live turntable performances focus on the values of accidents and it’s unique, complicated possibilities with sound emitting machinery like the turntable. Influenced by improvisation in contemporary art, her work expands outside of the sound world straddling different disciplines of interest. She was awarded the Jerome Foundation’s Emerging Artist Grant by New York’s Roulette Intermedium in 2008, and in 2009 she became a recipient of the Van Lier Fellowship. Maria was an artist in residence with the Merce Cunningham Dance Company, the Clocktower and the DIA:Beacon Museum. She has worked with Christian Marclay and the Whitney Museum of American Art as part of Christian Marclay: FESTIVAL and has shared the stage with renowned artists such as: Pauline Oliveros; Thurston Moore; Lydia Lunch; Phill Niblock and Otomo Yoshihide.

Tzyann Hsu was born in Taiwan. She began her training in Yang Style Tai Chi Chuan at the age of 16. After coming to the United States, she furthered her study of Tai Chi Chuan and Qigong, and earned a Teaching Certificate for Tai Chi Chuan from Sifu (Master) Chan Wai Kwan, chief instructor of the Tai Shan Martial Arts Institute in Tai Shan, China. She is also a former dancer and choreographer.

This project is made possible in part with public funds from NYSCA’s’ Electronic Media and Film Presentation Funds grant program, administered by The ARTS Council of the Southern Finger Lakes (www.NYSCA.org, www.eARTS.org).