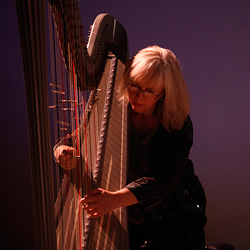 Solo works for amplified harp and electronics, and trios with Vincent Chancey on french horn, and Akua Dixon on cello.

A West Coast experimentalist who is an innovative performer on the harp as well as a composer embracing unusual challenges, Anne LeBaron’s compositions have been performed around the globe. Venues in Italy, Mexico, Sydney, Vienna, Sweden, Kazakhstan, New York, Los Angeles, and elsewhere have programmed her works for chamber groups, opera, cantatas, and presented her as a performer. Her operas celebrate legendary figures such as Pope Joan, Eurydice, Marie Laveau, the American Housewife, and Aldous Huxley. Her current opera-in-progress, Huxley’s Last Trip, (formerly LSD: The Opera) was awarded one of the first Discovery Grants from Opera America. The orchestra includes instruments built by American composer and inventor Harry Partch. Excerpts have been performed at three LA venues: at the Wallis Annenberg Theater in Beverly Hills, at the MAK Center for Art and Architecture at the Schindler House, and at the REDCAT in downtown Los Angeles.