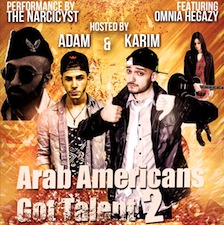 An Iraqi MC/Media Master born in the UAE, raised in Canada and continually questioned by the powers that be, The Narcicyst’s musical career was spawned through the collaborative work of the Euphrates Family: a growing collective of Muslim visual artists, musicians, painters, filmographers and, photographers. Releasing two albums with Euphrates, A Bend in the River and Stereotypes Incorporated, the crew garnered worldwide attention from Time Magazine to publications out of the Middle East and Europe. Narcy holds a Masters Degree in Media Studies focusing on identity politics in Hip-Hop poetics, specifically dissecting the Arab-American experience through a thesis project entitled, “Fear of An Arab Planet.” The Narcicyst has a book being released under the same title and a brand new album called The Illuminarcy.

The daughter of an Egyptian-Muslim father and an Italian-Catholic mother, Omnia Hegazy grew up in New York City with an intense passion for music and storytelling. Her sound is informed by guitar-driven American pop/rock, maqam-based Arabic folk, and the politically-charged singer-songwriters of the past and present. Acoustic guitar and songwriting is her choice medium of self expression, although she is also a trained classical violinist, belly dancer, and choreographer. She seeks to create a fusion between East and West in both her music and her dancing. Omnia is a graduate of Clive Davis Institute of Recorded Music at New York University’s Tisch School of the Arts. She performs frequently at venues and colleges in the NYC area, and hopes to tour within the year.