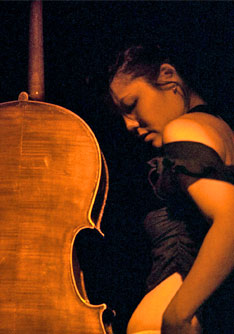 AUDREY CHEN is a Chinese-American musician who was born into a family of material scientists, doctors and engineers, outside of Chicago in 1976. Parting ways with the family convention, she turned to the cello at age 8 and voice at 11. After years of classical and conservatory training in both instruments, with a resulting specialization in early and new music, she parted ways again in 2003 to begin new negotiations with sound in order to discover a more individually honest aesthetic. Now, using the cello, voice and analog electronics, Chen’s work delves deeply into her own version of narrative and non-linear storytelling. A large component of her music is improvised and her approach to this is extremely personal and visceral. Her playing explores the combination and layering of a homemade analog synthesizer, preparations and traditional and extended techniques in both the voice and cello. She works to join these elements into a singular ecstatic personal language. Recently, her primary focus has been her SOLO project but she is also involved in many various collaborations. Among musicians, she has worked with Phil Minton, Tetuzi Akiyama, Toshimaru Nakamura, Ko Ishikawa, Tomomi Adachi, Matana Roberts, Elliott Sharp, Aki Onda, Phill Niblock, Frederic Blondy, Jerome Noetinger, C. Spencer Yeh, Nate Wooley, Mats Gustafsson, Mazen Kerbaj, Michael Zerang, Tatsuya Nakatani, Le Quan Ninh, Joe Mcphee, Susan Alcorn, Michele Doneda, Paolo Angeli, Gianni Gebbia, Dylan Nyoukis plus many more. Some more current projects have included: duos with Phil Minton, Luca Marini (kamama), Frederic Blondy, Robert van Heumen (abattoir), Katt Hernandez (Isabel), Nate Wooley (heave and shudder), Wouter Jaspers, and Id M Theft Able.

Nate Wooley (b. 1974) was raised in Clatskanie, Oregon, a small fishing and lumber town on the Columbia River. He began playing trumpet professionally with his father at age 12. After college in Eugene, Oregon and Denver, Colorado he moved to Jersey City, New Jersey, where he currently resides. Since 2001 he has become a much sought after performer, composer, and improviser, working with Anthony Braxton, Evan Parker, John Zorn, Christian Marclay, C. Spencer Yeh, and David Grubbs , among others. His trumpet playing has been called “exquisitely hostile” by Italy’s Touching Extremes Magazine, and his solo performances and recordings have been numbered amongst a privileged handful that have helped to shape a new approach to the instrument.

Brian Chase is a drummer and composer living in Brooklyn, NY. Growing up on Long Island, he started taking private drum lessons when he was five which lead to earning a Bachelors of Music from the Oberlin Conservatory in Ohio. Though he works in a variety of contexts, Brian is probably best known as a member of the rock group Yeah Yeah Yeahs, a band that has toured extensively throughout the world and has been nominated for two Grammys. Other recorded projects include the Seconds, a minimalist punk rock band that has two albums on the 5rc label, a duo ensemble with saxophonist Seth Misterka that has a record on the Heathen Skulls label, and Jeremiah Lockwood’s Sway Machinery with a record on JDub. Performance collaborations have included Matt Welch, Jessica Pavone, Mary Halvorson, Stefan Tcherepnin, Alan Licht and Okkyung Lee. Brian is also interested in the Just Intonation tuning theory and, heavily influenced by the work of La Monte Young introduced to him by guitarist Jon Catler, has begun an ongoing recording project in which the principles of Just Intonation are applied to drums and percussion. This project, called “Drums and Drones,” has seen live performances at the Stone and the Abrons Arts Center. His most influential drum and percussion teachers are and have been Susie Ibarra, Greg Bandy, and Michael Rosen. Away from the drums, Brian is a regular practitioner of Ashtanga yoga.