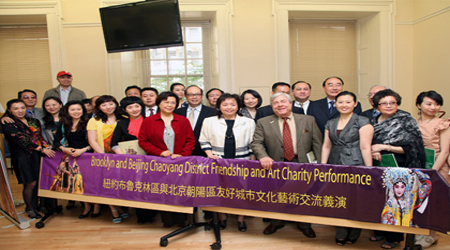 On Friday, May 18, Brooklyn Borough President Marty Markowitz hosted the Beijing Guo Sheng Peking Opera Troupe at Brooklyn Borough Hall. The Troupe will have a special invitation-only performance at Roulette on May 20th.

“Brooklyn is the proud home of the fastest-growing Chinese community in New York—at the rate we’re growing, within ten years we’ll have the largest Chinese population in the City,” said BP Markowitz. “So it is only fitting that Brooklyn host the Beijing Guo Sheng Peking Opera Troupe’s triumphant first performance in the United States. I know the Troupe is one of the most famous in the world, but like I always say, you haven’t hit it big until you’ve made it to the ‘big stage’ of Brooklyn, USA.”