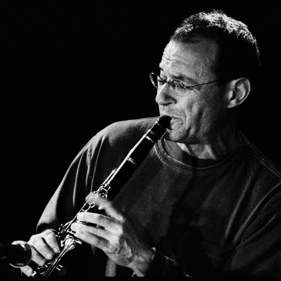 Clarinetist and composer Ben Goldberg grew up in Denver, Colorado. He received his undergraduate music degree from the University of California, Santa Cruz and a Master of Arts in Composition from Mills College. He was a pupil of the eminent clarinetist Rosario Mazzeo and studied with Steve Lacy and Joe Lovano. From 1992, when his group New Klezmer Trio released Masks and Faces to 2013’s simultaneous release of Subatomic Particle Homesick Blues and Unfold Ordinary Mind Ben Goldberg has shaped a career through the relentless pursuit of musical truth across many genres and styles.

In 2012 Ben premiered Orphic Machine, a ten movement song-cycle based on the poetical writings of Allen Grossman. Commissioned by Chamber Music America’s New Jazz Works and performed by an all-star nine-piece band with Carla Kihlstedt on vocals, Orphic Machine was recorded for a 2015 release with the help of a grant from the Shifting Foundation.