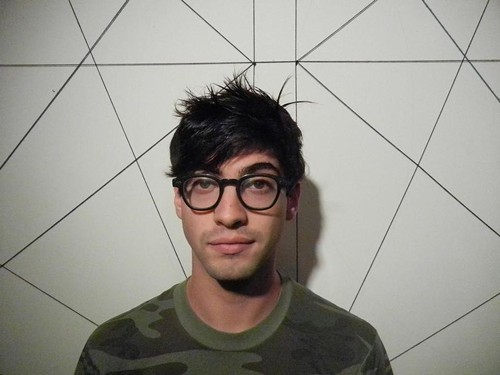 Each year, Roulette and the Jerome Foundation commission new work from emerging composers. Tonight, Roulette is thrilled to present the solo electric guitar work of Brooklyn based composer/performer Ben Greenberg.

Ben Greenberg began Hubble in 2011 as a solo guitar project extended from his work with avant-rock band Zs and punk-fuck band Pygmy Shrews. Relying on virtuosic guitar techniques more in line with metal shredders or blues heroes than the experimental scene, Greenberg implemented finger-tapping and minimal use of pedals (no looping ever!) in his long-form compositions, setting him apart from legions of crescendo-building contemporaries. A cassette on NNA Tapes in 2011 entitled Hubble Linger was the first available recording from Greenberg‘s project, The tape was well received, even inciting electronic musician Keith Fullerton Whitman to claim: “…I’m fairly floored by this extended solo-trance-out from Zs guitarist Ben Greenberg, who seems to have invented a device that halts time (musical, actual, and meta-physical); its use is put to great effect across this 60-minute blast of cycling ‘stereo’ chord progressions and assorted haze(s) that approaches the fervour of MBV / Belong’s filtered-out high-gain wash while retaining the minimalist patina of Charlemagne Palestine piece … awesome.” It was followed by the debut full-length album Hubble Drums later that year on Northern Spy Records, which received such praise as…

“At once heady and visceral, psychedelic and intensely lucid, Hubble’s mesmeric guitar webs are laser-etched incantations to the sublime. At the luminous crossroads of John Lee Hooker and Philip Glass, this is virtuosic and visionary sound-sculpture that kicks the concept of what is music just a little further down the road. There is something new under the sun. Just listen.” –Michael Azerrad

Benjamin Greenberg was born at Beth Israel Hospital at 16th street and 1st avenue in New York City on February 22nd, 1985. Six years later, he began studying music very, very seriously and has maintained that same level of intensity and focus ever since. Growing up in the city afforded young Ben a multitude of musical outlets once he was old enough to meet fellow musical travelers. By his estimate he has played in over 50 bands in his less than 30 years on this Earth. Among that list would be found lesser-known projects of yesteryear, such as The Fugue, Archaeopteryx, and The Jazz Standard Youth Orchestra, or better known and currently active bands of which he used to be a part such as doom-gloomers Bloody Panda, or free-jazz-bastards, Little Women. While attending the New School for Jazz and Contemporary Music, Mr. Greenberg joined NYC avant-mainstays Zs at the ripe old age of 21. His six-year tenure in the band taught him ohhhhh so much about sight reading, really high pitched guitar harmonics, Morton Feldman, and the place of the saxophone in contemporary music. At the same time, his Black Flag-cum-Flipper punk band, Cutter, was turning into his X-cum-No Trend punk trio, Pygmy Shrews, who then slayed many a soul in town and across the land. Both bands helped establish his reputation as a quite singularly-voiced guitar player, a ruthless and unashamed composer of tunes, songs and longer forms, and a visionary and resourceful recording engineer. These days Ben spends most of his time on the road with the band The Men, but still finds plenty of time to work on Hubble.
http://missionhubble.blogspot.com
http://wearethemen.blogspot.com

Ben Greenberg’s performance is mode possible by the Jerome Foundation.