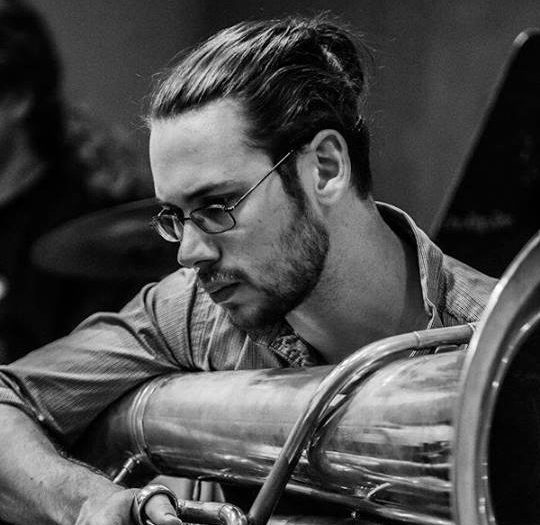 Composer Ben Stapp, leads his ensemble, the Zozimos Collective in the premier of Eight Houses(2011). Eight Houses is a large multi movement work based on the 8 core hexagrams of the I-Ching. It is written for a brass quintet, two guitars/pedals and percussion & piano with electronics. Sonically, Ben Stapp’s work is based on his harmonic theory – micro-functional tonality. Noticeable influences by era are Post-Romantic, Impressionist, Minimalist and Spectralist composers. Separate from John Cage’s use of the I-Ching, this piece resolves to musically represent the core elements of the I-Ching, NOT the way in which the elements of the oracle were practiced. As the piece progresses each instrumentalist as well as specific formations will be featured as soloists, therein lie moments of chance.

Although trained as a classical/orchestral tubist with legendary pedagogues, Tommy Johnson and Roger Bobo, Ben Stapp began his professional career recording for the improvised music label Clean Feed with the likes of Herb Robertson, Alipio Neto, Ken Filiano and Michael T.A. Thompson. His first project as leader took him on tour in Portugal and then finally to New York to record with Tony Malaby and Satoshi Takeishi. With the self release Mr. Stapp was quickly recognized by All About Jazz, as “most certainly one to watch” and “the debut of a fresh new voice.” The Village Voice gave it an Honorable mention and the New York Times greeted it as a “rugged trio.” Since his move to New York he has been composing and performing with his new mixed ensemble projects – Zozimos, and has played at the Stone, the Tea Lounge and Cornelia Street cafe among others.