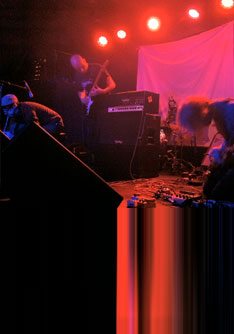 BloodMist is the new collaborative trio of composer/performer/multi-instrumentalists Jeremiah Cymerman, Toby Driver and Mario Diaz de Leon.  Since the early 2000s each of these three composers have been making bold and important contributions to the fields of contemporary concert music, dark compositional rock, electroacoustic improvisation and beyond.  With shared aesthetics rooted in intensity and a tendency for the extreme the trio plans to use their time at Roulette to workshop, rehearse and record their first album, all in preparation for their world debut on the stage of Roulette on July 25th, 2012.

Support for this program provided by the Jerome Foundation.

ABOUT THE MUSICIANS
The music of Jeremiah Cymerman, as described by Chris Weingarten of Spin/Village Voice “cuts a maddening line between free improv and musique concrète”. Based in New York City since 2002 and as an active participant in several different scenes, Cymerman’s work reflects an interest in improvisation, electronic manipulation & production, traditional, studio & graphic composition and solo performance. Cymerman has worked or performed with a broad range of contemporary artists and frequent collaborators include Toby Driver, Nate Wooley, Brian Chase, Mario Diaz de Leon, Christopher Hoffman, Jessica Pavone and Matthew Welch.  Cymerman has toured internationally, received numerous commissions and published several articles on music and music production. He has released several recordings of his own music and his recorded output has been documented on the Tzadik and Porter record labels.

Toby Driver is a composer, bandleader, multi-instrumentalist, and visual artist based in Brooklyn, NY, who spends most of his time as the frontman of the unique avant-rock band, Kayo Dot, and the dark electroacoustic chamber group, Tartar Lamb.  He studied composition with the venerable and legendary musician, Yusef Lateef, in Western Massachusetts, and later lived in Boston, finally moving to New York in 2007. He has released many full-length albums and various singles of his own compositions on cult and prestigious indie labels alike, has appeared as a guest or collaborator on several other recordings, and regularly tours internationally with his various ensembles, including as bassist of composer Trey Spruance’s Secret Chiefs 3.

Mario Diaz de Leon (b. 1979 in St. Paul, MN) is a composer and multi-instrumentalist. Praised by the New York Times for their “hallucinatory intensity”, his works for classical instruments and electronics have been performed internationally by ensembles such as ICE, Talea, iO Quartet, JACK Quartet, San Francisco Contemporary Music Players, and Romania’s Hyperion Ensemble.  He has performed, toured and recorded in many bands as a guitarist, and currently plays guitar in Mirrorgate. His discography includes 4 releases on the Shinkoyo label, and a critically acclaimed CD of his chamber music on John Zorn’s Tzadik label (“Best of 2009” – Time Out New York, Chicago Reader).