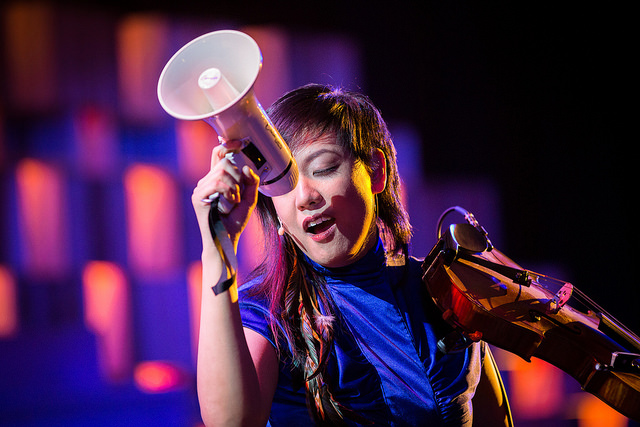 ( (( PHONATION )) ) is a multimedia solo performance by Bora Yoon with live video manipulations by Luke DuBois- exploring where sound connects to the subliminal using found sounds, new and antiquated instruments, electronic devices, and voice. Using a sound designer’s approach to performance composition that is steered by a penchant for a song, ( (( PHONATION )) ) engages with music as music, and not as part of a genre, taking the means to one end, and using it for another to form new utterances of sound and the beginnings of a new sonic language, within its spatial and architectural context. In every case, a particular sonic geography is evoked that might be inspired by a simple, found-sound in the world, or an expression of a sonic paradox bouncing around only in the mind.

Bora Yoon is an experimental sound artist, composer and performer, who creates architectural soundscapes from found objects, chamber instruments, digital devices, and voice. Featured in WIRE magazine and on the front page of The Wall Street Journal for her musical innovations-Yoon has presented her original soundwork ( (( PHONATION )) ) internationally, at Lincoln Center, the Nam June Paik Museum in Seoul, Patravadi Theatre in Bangkok, the Bang on a Can Marathon, BAM, and John Zorn’s Stone. Her music has been presented by Samsung and the Electronic Music Foundation; commissioned by the Young People’s Chorus Chorus of NYC and SAYAKA Ladies Chorale of Tokyo; awarded by Billboard, BMI, the Arion Foundation and the Asian American Arts Alliance; and published by Swirl Records, MIT Press, and the Journal of Popular Noise. Upcoming plans include scoring and performing in the staged production of Haruki Murakami’s acclaimed “Wind Up Bird Chronicle”; custom instrument design and performance with LEMUR; recording and remix projects with DJ Spooky, Meredith Monk, and early music group New York Polyphony; and a wax cylinder record for UK phonograph artist Aleks Kolkowski’s museum collection- while ( (( PHONATION )) ) continues to resonate and rarefact in concert.

R. Luke DuBois is a composer, artist, and performer who explores the temporal, verbal, and visual structures of cultural and personal ephemera. He holds a doctorate in music composition from Columbia University, and has lectured and taught worldwide on interactive sound and video performance. He has collaborated on interactive performance, installation, and music production work with many artists and organizations including Toni Dove, Matthew Ritchie, Todd Reynolds, Michael Joaquin Grey, Elliott Sharp, Michael Gordon, Bang on a Can, Engine27, Harvestworks, and LEMUR, and was the director of the Princeton Laptop Orchestra for its 2007 season.