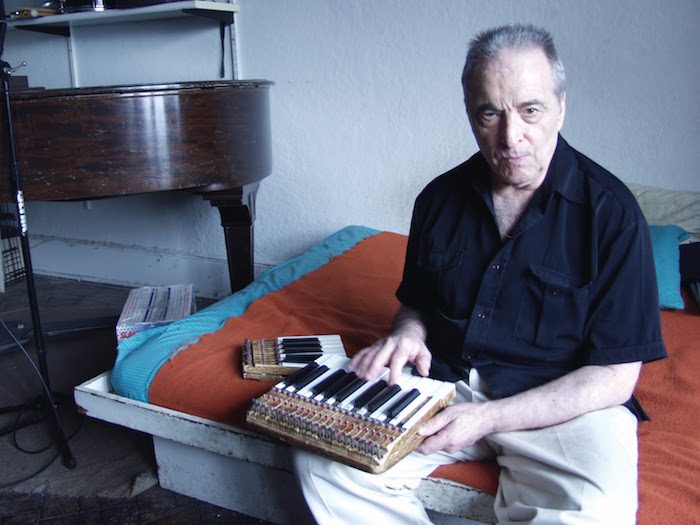 Pianist Bergman is a kinetic mixture of Bud Powell, Thelonius Monk, and Charles Ives and one of the most ambidextrous pianists in circulation. His collaborators have included Evan Parker, Peter Brotzman and Thomas Chapin. Staley is a trombonist known for wandering into the Serengeti equipped with just a breakfast bar and a harmon mute. His resume runs through nosebleed serialism into Zorn world. It’s a volatile mixture to put these two together, freestyle. Sometimes it is even pretty.

Borah Bergman (December 13, 1926 – October 18, 2012) was an American free jazz pianist. Bergman was born in Brooklyn to Russian-Jewish immigrant parents. His grandfather Meir Pergamenick was a cantor. Accounts of when he began to learn the piano vary: some assert that he learned clarinet as a child and did not commence his piano studies until adulthood; others, that he had piano lessons from a young age; one of his own accounts is that he took piano lessons as a child, then changed to clarinet, before returning to piano after being discharged from the army. As an adult, he developed his left hand playing to the point where he became essentially ambidextrous as a pianist, and could play equally fast in both hands, and they could act completely independently of each other; Bergman himself preferred the term “ambi-ideation” to “ambidextrous”, as it conveyed the added ability to express ideas achieved when both hands were equal. Bergman cited Earl Hines, Bud Powell, and Lennie Tristano as formative influences, although his own style was based on free improvisation rather than song form. Commenting on his other influences, Bergman said that “I was influenced strongly by Ornette Coleman… I was also very influenced by chamber music and Bach and Dixieland or New Orleans, where all of the instruments were playing contrapuntally and polyphonically. So I figured I’d like to do it myself”. –Bio as of 2019

Jim Staley occupies a unique position among trombonists, crossing genres freely between post-modern classical music and avant-garde jazz. He boasts spectacular technique, including the ability to spit forth clusters of notes at rapid speed. Usually concentrating in the mid-to-lower registers of the trombone, his big, gruff tone hearkens to an earlier era, though his wondrous abilities and style plant him firmly in the free music world. Raised in Illinois, Staley served in the armed forces as a member of a U.S. Army Band in Berlin, before receiving Bachelor and Masters degrees in music from the University of Illinois in the late 1970s. In 1978, he moved to New York City, where he co-founded Roulette. Since then, Staley has lived in lower Manhattan, where he has actively performed and recorded with many cutting edge innovators, including composer/alto saxophonist John Zorn, guitarist Elliott Sharp, and vocalist Shelley Hirsch. In addition to recordings under his leadership, he appears on several of Zorn’s CDs. He also performs and records with a classical ensemble, the Tone Road Ramblers. –Bio as of 2019