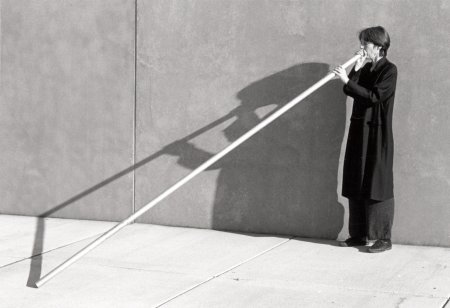 Composer/sound artist Brenda Hutchinson performs with her Long Tube, a self-built, invented instrument that extends the voice FAR beyond the body, using sculptural, acoustic and electronic means. She also will present documentation from The Bell Project, a 5-week long cross-country performance piece involving collaborations and interactions with random strangers. Check out: http://thebellproject.blogspot.com/

Hutchinson is a composer and sound artist whose work has been presented at international festivals in New Zealand, Europe, Latin America and Canada. Venues in the United States include Lincoln Center, Merkin Concert Hall and The Kitchen (in New York,) New Langton Arts, The Lab and the Exploratorium (in San Francisco) and “Soundprint” on NPR.

Her works include performance and composition for dance, opera, film, video and radio and multi-media interactive installations. Her work makes extensive use of language, stories and ambient and sampled sounds. Brenda often acts as a catalyst for experiences involving other people, whose stories and/or performances are recorded and shared with other audiences through Brenda’s work in performance and radio. She continues to develop a body of work she refers to as “Collaborating with Strangers” that is characterized by large-scale or long-term interactive works with people she doesn’t know.

Brenda received the Gracie Allen award from the American Women in Broadcast Television and Radio. In 2005, she was awarded the Ucross Residency. Other commissions and awards have come from the American Composers’ Forum, National Endowment for the Arts, Meet the Composer/Reader’s Digest, the McKnight foundation, NYSCA, NYFA and California Arts Council.

Since 2002, Brenda has been on the faculty at the Milton Avery Graduate School of the Arts at Bard College. She has been an artist in residence at San Quentin Prison, Headlands Center for the Arts, Harvestworks, the Exploratorium and Djerassi. Recordings of her work are available through TELLUS, Deep Listening, the Aerial, O.O. DISCS, Frog Peak Music and Leonardo Music Magazine.