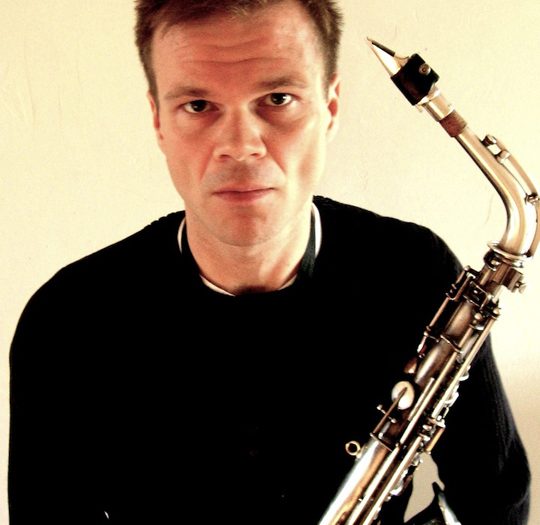 “Lensing” is a suite of compositions written for eight musicians. Although incorporating some group improvisation, “Lensing” focuses primarily on composition which draws on influences ranging from Varese to Morricone and Japanese Gagaku. “Lensing” was commissioned by Roulette in 2001 with funds From The Jerome Foundation and was premiered at Roulette on April 18th, 2002.
Musicians performing will be:

Briggan has made three records as a leader on Knitting Factory Records and has appeared on over forty other records as a sideman. He has been reviewed and interviewed in jazz and new music publications in the United States, Europe and Japan. In the 2002 “Downbeat Magazine” critic’s poll, “Sex Mob” was awarded “Best Beyond Band” and “Best Acoustic Jazz Band TWR”. Briggan was also named in the “Alto Saxophone TWR” category in both 2002 and 2003. The CD “Unspeakable” by guitarist Bill Frisell, on which Briggan appeared, won a Grammy Award for Best Contemporary Jazz Album in 2004. The most recent album by Sex Mob called “Sexotica” has been nominated for a Grammy Award for 2007 in the same category.

“Good Kitty”, the first band in which Briggan was the leader, featured an unusual trio of himself on alto saxophone, clarinet/tenor saxophonist Chris Speed, and drummer Mike Sarin. Briggan recorded his first CD as a leader for Knitting Factory Records with “Good Kitty” in 1995.
Briggan’s next recording project “300” featured another trio which reunited Briggan with “Pig Pen” leader Wayne Horvitz on keyboards, and added fellow “Sex Mob” member Kenny Wollesen on drums. Recording for the Knitting Factory record label in 1997, “300” garnered notable critical acclaim for their self-titled debut recording culminating in making the “Jazziz Magazine Critic’s Top-Ten recordings of 1998” list twice.

While at Cornish College of the Arts, Briggan studied electronic music and advanced theory with composer/professor Jarrad Powell. In 1999 “Descending to End”, a solo studio project, was made over the course of nine months and received excellent reviews by the music press.
As a composer, Briggan was commissioned by Roulette New York with funds provided by the Jerome Foundation to present a program of new music. A mostly through composed chamber piece in eight parts, for eight musicians and conductor titled “Lensing”, was premiered at Roulette in April 2002.

Briggan continues to work with electronic music. He has released the CDs “Object #1” and “Object#2” which are part of a series of releases each dedicated and inspired by the work of a particular visual artist. He has also begun working with live electronics in several duo and trio settings with the likes of Wayne Horvitz, Jim Black, Skuli Sverrisson and others. He is also involved with a variety of collaborations with the visual artist Raha Raissnia which fall under the title “Systems” which has appeared in New York City galleries and at Anthology Film Archives. His electronic music was recently featured on WPS1 Art Radio.