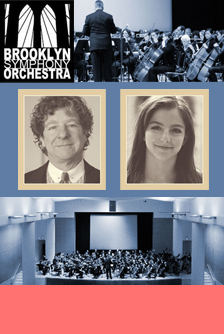 On Sunday, November 24, 2013, at 4 PM, Brooklyn Friends of Chamber Music (BFCM) presents members of The Brooklyn Symphony Orchestra in the second concert to honor the memory of Hope Reichbach (1988-2011), daughter of Justice Gustin L. Reichbach (1946-2012) and Ellen Meyers.

Hope Reichbach grew up in Brooklyn and attended Hunter College High School. In her senior year she teamed up with the New York Civil Liberties Union to sue then-Secretary of Defense Donald Rumsfeld for his illegal military recruitment tactics. City Councilman Steve Levin made Hope his Communications Director, and, at age 22, Hope ran for Female District Leader. As Hope for Brooklyn, she was recognized as a rising star in Brooklyn politics. She died in April 2011.

All proceeds from this concert will be donated to the Hope Reichbach Fund, (www.hopeforbrooklyn.com) which provides scholarships for students in civic leadership and grassroots community organizing.

Tickets: $20 at the door
Contributions to the Hope Reichbach Fund are tax-deductible
Students: $10
TDF accepted

The musicians:
The Brooklyn Symphony Orchestra was founded in 1973 and is comprised of talented amateur, semi-professional, and professional musicians.
brooklynsymphonyorchestra.org

Nicholas Armstrong has been the orchestra’s Artistic Director since 1997. He is also Head of the Performing Arts Department at Poly Prep Country Day School in Bay Ridge.

Antonio Campillo, flute, studied with Wilbert Hazelzet in The Netherlands. He holds a degree in Historical Performance from the Juilliard School where he studied with Sandra Miller. He is the founder of the New Utrecht Ensemble and performs regularly with The Four Nations.