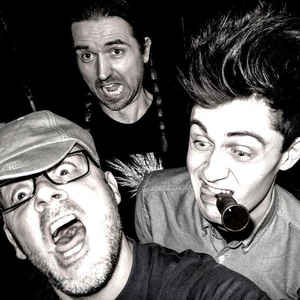 Chuck Bettis and Derek Morton met each other in Washington DC, crossing paths as part of that city’s burgeoning experimental music community. Upon relocating to New York City, the two began collaborating as a duo before IQ Jones joined them in early 2007. IQ’s alarm clocks, duck calls, and array of unlikely sound devices provide a lively counterpoint to Bettis’ machine noise and Morton’s chaotic circuits.

In the 90’s, Chuck Bettis shook up Washington DC with no-wavers the Metamatics, his solo electronics moniker Trance and the Arcade, and the genre-traversing collective All Scars before relocating to NYC in 2002. He has since collaborated with revered “downtown” improvisers John Zorn, Fred Frith, and Ikue Mori (amongst others), and has recorded with such groups as Nautical Almanac, Yellow Swans, and Measles Mumps Rubella.

Derek Morton has generated and manipulated sound since the early 1990’s. From his days as a rock guitarist and record label owner to more recent forays into performance curating and gallery installation, he has relentlessly investigated the possibilities of audio in all contexts. He is equally interested in live improvisation, studio research, exploratory composition, and electronic reconfiguration. Morton’s sound experiments have attacked everything from cutting-edge technologies like surround-sound to reinvented tools like handheld video game consoles and controllers. His work with violinist John Coursey in the duo Mikroknytes has resulted in numerous performances around the U.S. as well as four full-length CDs.