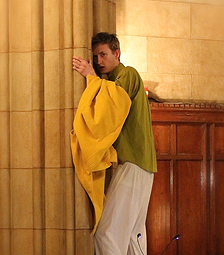 Cantata Profana presents its inaugural peformance at Roulette with an evening of music, drama, and a little bit of madness.

The program centers around Peter Maxwell Davies’ Eight Songs for a Mad King, a half-hour monodrama for baritone and six players about the mad ravings of King George III. An intensely dramatic and highly theatrical piece, full of insanity and beauty, Eight Songs is a profoundly evocative exploration of madness in art.

With the incomparable John Taylor Ward reprising his role as the King, and an astounding ensemble of baroque and modern singers and players led by Jacob Ashworth, this is sure to be an memorable introduction to a fearless new ensemble.

Check out our interview with conductor Jacob Ashworth on our blog.

The cash bar at Roulette will be open at 7:30 prior to the performance.

Tickets available at brownpapertickets.com
$20 general, $10 students
or at cantataprofana.com.

Cantata Profana was founded in 2013 with students from the Yale School of Music and Institute of Sacred Music. Born like all great ideas – in a diner in New York – Cantata Profana exists as a new approach to the creation of an ensemble: Rather than confining the group to any particular parameters, the ensemble emerges out of the artists’ desires to work together and the common goal of exploring new and classic repertoire. With a dedicated group of players making up its core, the ensemble is flexible in its arrangement, able to combine everything from piano/vocal music to baroque trio sonatas to chamber operas, all in the same evening. More info at cantataprofana.com.