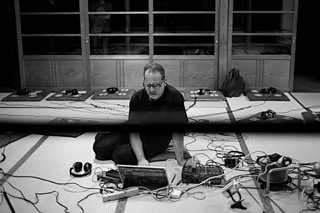 Roulette TV sits down with Carl Stone to discuss his work, computer as meta-instrument, the power of new surroundings, and how language comprehension (or lack thereof) can affect a piece of music.
Electronic minimalist pioneer Carl Stone presents several sections from his full-length piece, FUJIKEN, and shares the stage with guests guitarist Elliott Sharp and accordionist Shoko Nagai in exploratory improvisations. FUJIKEN, is based largely in part from a series of field recordings Stone made in Japan, Thailand, Cambodia and Vietnam in 2011 and 2012. A work for solo computer and electronics, FUJIKEN fully captures the artist’s fertile imagination: combining a richly dense ambient foundations of found-sounds with layers of electronic manipulation. In the second act, Stone, Sharp, and Nagai explore the dynamic interplay of chaos and harmony/ambience and drone that emerges from free, collective improvisation