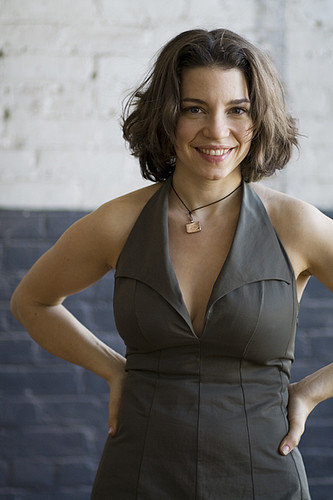 Carla Kihlstedt plays songs for violin and voice: songs of her own writing, songs written by friends (among them, Lisa Bielawa and Jorge Liderman) and perhaps songs written by enemies… atonal songs, one-chord songs, tunefull songs and toneless songs.

Carla Kihlstedt is active both as a composer and a violinist. She is a founding member of both Tin Hat Trio (an accordion-violin-guitar trio, whose two CDs are out on Capitol’s Angel/EMI Records) and of the art-rock band Sleepytime Gorilla Museum. Most recently, Carla is working on a solo project, Two Foot Yard, using both her violin and her voice simultaneously. She was one of three singers in the band Charming Hostess for six years.

Though she has strayed far from where she was planted, Kihlstedt has strong roots in classical music. She studied at the Peabody, San Francisco, and Oberlin Conservatories of Music. She has become an influential musical voice in the San Francisco Bay Area since moving there eight years ago, exploring the range of her instrument in many other settings. Carla has performed as a violinist in the past year with pianist Awadagin Pratt and clarinetist Don Byron. She is a frequent performer with Ear Play, the Berkeley Contemporary Chamber Players and the San Francisco Contemporary Music Players.

She recently was commissioned to write a piece for the Bang on a Can All Stars group. Last year she was a featured soloist on the MATA festival in New York and was commissioned by Merkin Hall to write and perform a duo for clarinetist David Krakauer as part of their emerging composer series, Zoom: Composers Close-Up. She has contributed to the recordings of Tom Waits, Mr. Bungle and the Grassy Knoll. Her solo CD for the Tzadik label was released in 2003. Carla has always been very interested by the influence that music, theater and movement have on one another. She has worked extensively with choreographers, including Jo Kreiter and her company Flyaway Productions, Eleni Drogaris and Shinichi Momo Koga/inkBoat.