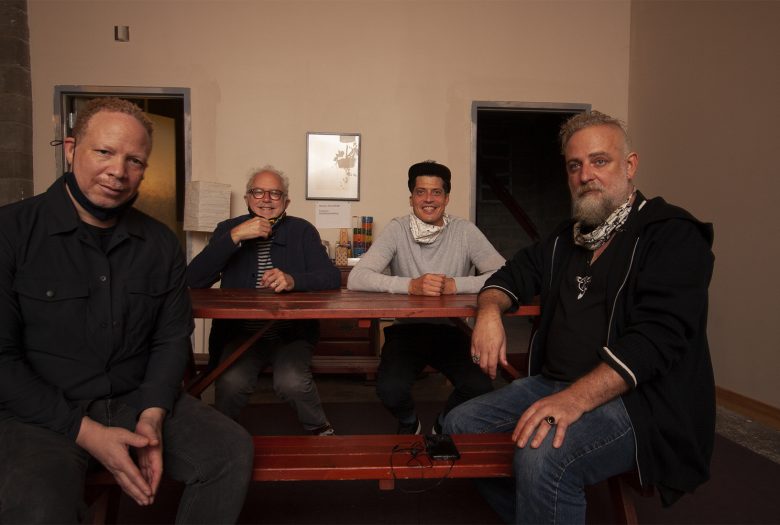 The best thing I caught all weekend,” said critic Peter Margasak of the 2014 New York Winter Jazzfest, “was a superb trio led by drummer Ches Smith with pianist Craig Taborn and violist Mat Maneri, which expertly infused seductively narcotic writing with a mixture of brooding melody and rich texture.” The trio released its debut The Bell (ECM) in 2016, and went on to tour extensively, developing its chemistry and camaraderie in the process. Recently, Bill Frisell joined the group to record a new set of music to be released on Pyroclastic Records next year.

In addition to leading his own trio (with Craig Taborn and Mat Maneri), We All Break, and his solo Congs for Brums, Ches Smith also works as a side musician, playing drums and percussion with Marc Ribot, Tim Berne, Mary Halvorson, Dave Douglas, Darius Jones, Matt Mitchell, Jandek, John Zorn, Secret Chiefs 3, Terry Riley, Erik Friedlander, Dave Holland, and many others. He collaborates in the doom-improv trio Tanks with Brandon Seabrook and Toby Driver, and the free jazz duo Good for Cows with Devin Hoff. He is a long-time student of Haitian Vodou drums and performs in religious and folkloric contexts in New York, San Francisco, and Haiti. He has published an article speaking to this experience, “We All Break: a Crossroads of Haitian Vodou and Creative music,” featured in John Zorn’s Arcana VII.

Over the course of a twenty-five year career, Mat Maneri has defined the voice of the viola and violin in jazz and improvised music. Born in Brooklyn in 1969, Maneri has established an international reputation as one of the most original and compelling artists of his generation, praised for his high degree of individualism, a distinctive marriage of jazz and microtonal music, and his work with 20th century icons of improvised music.

Eclectic and versatile, guitarist Bill Frisell always manages to sound distinctively himself while fitting into any playing situation. He has become one of the most influential guitarists of the modern era with a wide-open approach that reconciles the sound of rock and R&B guitar with the sophisticated harmonic style and methods of jazz.