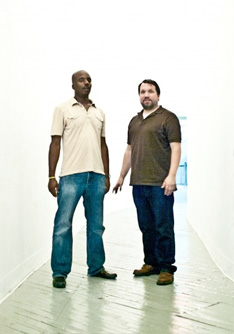 SPY MUSIC FESTIVAL, now in its second year, is supported financially by the not-for-profit Jump Arts and the media sponsors Tiny Mix Tapes and The Village Voice. In addition, Six Points Brewery has thrown their support behind the event by brewing a signature Northern Spy brew for the occasion that will be available at select festival venues.

The Magik Markers are a rock band from Hartford, Connecticut. The members, Elisa Ambrogio, Pete Nolan and Leah Quimby started the band in their basement in 2001. After opening for Sonic Youth on their American tour in 2004, the band gained notoriety. Their debut album, I Trust My Guitar, Etc. (released in vinyl only), was released in 2005 on Thurston Moore’s Ecstatic Peace label. In 2006, they released A Panegyric To The Things I Do Not Understand under Gulcher Records, the Markers’ first proper CD. Also in 2006, the band recorded a session for Southern Records’ Latitudes series, which was released as The Voldoror Dance.

The blues has grown up a lot in the last ten years, since guitarist Andrew Burnes left New York for Georgia, bringing a de facto end to the powerful abstract blues of Haunted House. In the time since, a new generation — sometimes referred to as Freak Folk or New Weird America and spearheaded by Tom Carter, Jack Rose and Ben Chasny— has followed in the footsteps of Loren Connors, John Fahey and a handful of others who have long maintained that the blues is something more than 12 bars and a backbeat. After the demise of Haunted House, Connors continued preaching the gospel, often with his wife — the enigmatic singer Suzanne Langille — to anyone who would listen, playing a slow, distorted, reverb-drenched blues as slowly the world began to come around. Then, in the summer of 2010, the stars aligned just so: Burnes was in town for a few days, percussionist Neel Murgai was available, and the Brooklyn’s Issue Project Room was booking matinee concerts in their courtyard. The band had only existed for a brief two years and had been absent for a decade, but they picked up right where they left off with only a brief soundcheck as rehearsal. Another matter of months, and they were in the studio, recording at long last the follow-up to their 1999 Erstwhile release Up in Flames.