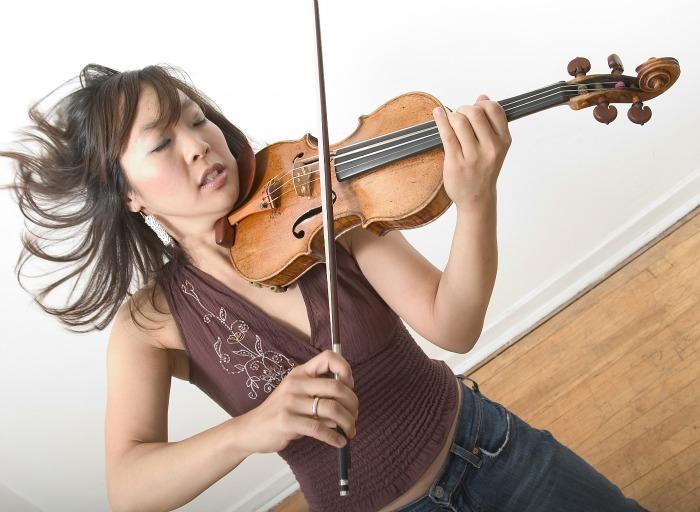 2 Sky TRIO presents an eclectic mixing of traditional and contemporary music
that blends the western traditions of the violin and guitar along with centuries old
Korean drumming, folklore, and dance. Hear, Watch, and Listen to new sounds and
engaging uses of these time-honored instruments.

Vongku Pak is a Korean folk drummer/dancer and producer based in Brooklyn, NY. He has been solidly trained with Korean traditional folk arts, such as poongmul, samulnori and elements of traditional dance. He studied with Korean Human National Treasure, Hyungsoon Kim and Kibock Kim. He also uses his Western drama training from BrooklynCollege/CUNY (B.A in Theatre 2005) to bring new facets into his art. Integrating visual and theatrical elements, like narrative and dramatic structure, he enhances the traditions that he studied in Korea.
Mr. Pak has been featured Chihuahua International Festival in Mexico (2010), CID-UNESCO in Istanbul, Turkey( 2009), “International Night” in Atlantic City, NJ( 2009), “Music From East To West” at Miller Theatre (May, 2008), 2 Sky Trio at The Poietis Theater (2007), Peace Concert for Unification of Korea at Carnegie Hall (2007), Cibao Expo in Dominican Republic (2006), Poetry 2006: Expression in the Right Direction at Brooklyn Academy of Music (2006), Street Performance Tour in 15 European countries(2005), Lincoln Center Out of Doors Festival (2001). Mr. Pak was featured on feature filmDowntown Express (Dir. David Grubin, 2010), FIX 11 Moring News (2009), Fox TV’s Good Day New York, and appears on music recordings by Xtatika (Zardick) and Ishle Yi Park. Also, he performed at numerous New York City down town performing venues.

Hailed by Time Out New York as “one of New York’s most reliably adventurous performers”, violinist Jennifer Choi has charted a career that breaks through the conventional boundaries of solo violin, chamber music, and the art of creative improvisation. s. Choi is regularly sighted in solo performances of rare works that stretch the limits of violin playing often calling for extended techniques, improvisation, and the use of electronics. In 2006 she received a grant from the New York State Music Fund for the premiere and performances of ‘Holding Fast’ for violin and video written for her by Randall Woolf. She also gave the world premiere of John Zorn’s solo violin work, ‘Goetia’ for the Works and Process series at the Guggenheim Museum, the premiere of ‘Serenade in Isolation’ by Wang Jie presented by the Music Theater Group, the U.S. premiere of Jacob ter Veldhuis’ ‘Capriccio’. She can be heard on over a dozen albums for TZADIK record label in compositions by new music icons, John Zorn, Elliott Sharp, Leo Wadada Smith, and the Susie Ibarra Trio with whom she has toured Europe and North America extensively as a creative improvisor and chamber jazz musician.