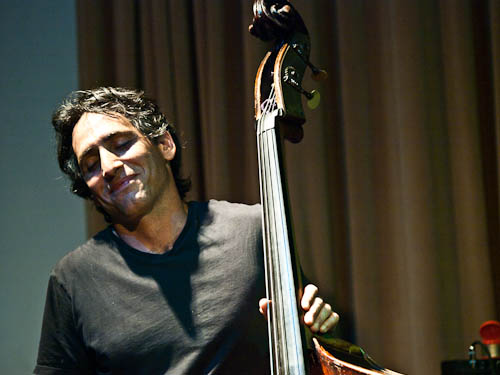 Adam Lane has been the music teacher and choral director atP.S. 321 for the past seven years. His teaching incorporates a wide variety of music including earlyAmerican roots music from Elizabeth Cotton, Leadbelly, and Woody Guthrie.American blues music from fingerpickers like Reverend Gary Davis andMississippi John Hurt, early Bluegrass from Uncle Dave Macon, and a selectionof traditional music from the Caribbean, Africa, and Asia. He is amulti-instrumentalist performing mostly with his voice, but often accompanyinghis singing with guitar, double bass (that?s the big one), ukulele (that?s thevery little one), tambourine, piano, or the traditional Appalachian dancinglimberjack. For this performance at Roulette Adam will be singing, and leadingsing-a-longs, but will also be performing a collection of circle game songsfrom the Caribbean and the Georgia Sea Islands. With help from a few P.S. 321chorus members, kids in the audience will be able to participate in thesetraditional games performed and played by children in Trinidad, Jamaica, andthe southern U.S. as recreation, but also as way to, in the most fun andexciting way, to learn and develop good (and funky) rhythm and singingskills.

In addition to his work with children, Adam Lane is also anaward winning jazz composer whose work has been performed in Europe and theU.S. He has recorded nine cds of his original compositions for large and smalljazz ensembles. His work can be found on the Cadence Jazz Records, C.I.M.P, andCleanFeed record labels.