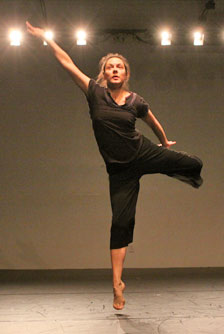 Chris Ferris & Dancers is known for its fearless action, physical indulgence, and elegant design. Loren Kiyoshi Dempster’s music for Circuitous Body will be created by musicians moving in the space much as the dancers do, yet covering with sound larger gaps in space than bodies physically can. Circuitous Body will begin with what could be the ending and end with a new beginning as the perception of the performance time line is dismantled. This piece will contrast highly set intricate work against structured improvisational textures exploring the thought and impulsive processes by which these sounds and actions are created. In Circuitous Body the audience’s focus will shift in a journey throughout the room as performers connect from the far corners to creating intimate dances and music just for you. Visit Chris Ferris & Dancers at www.chrisferrisdance.com

Chris Ferris is the artistic director of Chris Ferris & Dancers. Her work is based on an exploration of movement from a sculptural, dynamic and emotional point of view. Its focus is to bring you design in space and time with a human element. Chris Ferris & Dancers’ Nov. 2011 concert, Continental Drift, was presented at CPR-Center for Performance Research, Brooklyn NY. Proximity Of Clouds (2010 full evening work), premiered at Joyce SoHo NYC; incorporating sculptures that hang, swing, slash, glow, and illuminate creating ethereal forms, a forest of moving architecture, and corporeal presences. Ferris’ dances have been shown in New York at 3 season concerts at the Cunningham Studio Theater. Her work has also been presented at WestFest, Green Space Blooms, Amalgamate Artist Series, Performance Mix, Solar Powered Dance Festival, Dance Conversations at the Flea, WAXworks, d.u.m.b.o. Dance Festival, Movement Research at Judson Church, University Settlement, the 92nd Street Y, and a variety of other venues. Chris was the curator of the SWEAT Modern Dance Series and SWEAT Outdoors from 2000 to 2007. In 2005 Chris Ferris & Dancers was awarded a Meet The Composer Grant for composer Loren Dempster.

Loren Kiyoshi Dempster, uses a combination of cello, electronics, improvisation, notated scores, and extended techniques to create and perform music. An active chamber musician and improviser, he might be found in the next while performing music for Trio Tritticali, and the Dan Joseph Ensemble among many others. His compositions for music and movement have been presented at The Stone, Roulette, Issue Project Room, North River Music, Wesleyen College, and at Chez Bushwick, a 2007 Bessie Award winning performance arts space in Brooklyn of which he was a founding member. For over 12 years he had many performances with Merce Cunningham mainly playing the music for Interscape and Biped. Dempster has also toured with the choreographer Jeremy Wade, performing Glory, utilizing a live musical score co-composed/performed with Michael Mihalchick. Ever interested in the relationships between movement, space, and sound, he may be found creating or performing music for many choreographers and collaborators this season, including Harrison Atelier, Chris Ferris, Jonah Bokaer, Project Limb, and Margaret Paek.