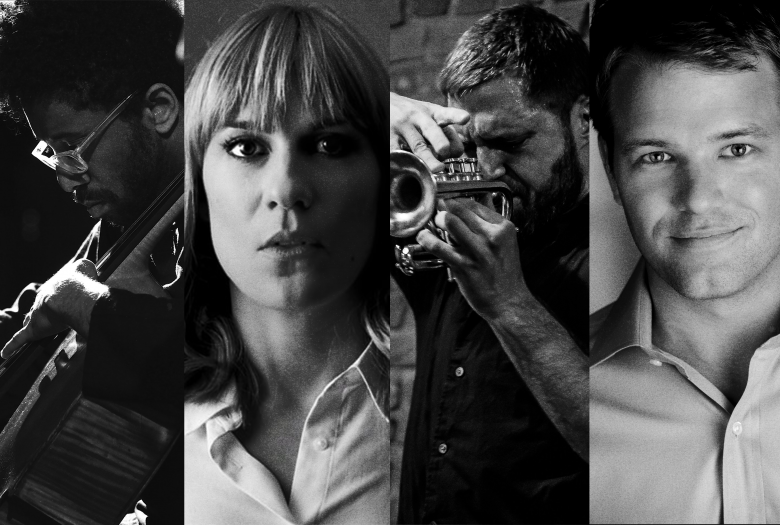 Bertha the Mom excavates the story of the birth of psychoanalysis via the famous case history of Fräulein Anna O, as farcical melodrama. Jump cuts between surreal and abstract sonic textures, rapid-fire dialog, and campy pop songs weave a multilayered narrative involving a man and a woman with a sordid history and the historical people they are meant to be playing as actors. Soprano Alice Teyssier and baritone Michael Weyandt are joined by trumpet player Peter Evans, pianist Emily Manzo, and cellist Seth Parker Woods to create a bizarre romp through the unconsciouses of composer Clara Latham and librettist James Currie. Bertha the Mom is directed by Katherine Brook.

In 1880 Vienna, Dr. Josef Breuer, the respected general practitioner and contemporary of Sigmund Freud, began treating a young woman by the name of Bertha Pappenheim. She suffered from “hysteria”: paralysis, hallucinations, unusual pains, and severely disturbed speech. Pappenheim, – later known as the mythical “Fräulein Anna O.” – allegedly found that putting her problems into words alleviated her symptoms, thus playing a formidable role in the creation of what would become known as the psychoanalytic method. So the story goes, Breuer broke off treatment after Pappenheim developed a phantom pregnancy and believed her baby was Breuer’s. This opera asks: what if the pregnancy was real?

Bertha the Mom explores the tension between the figures of Anna O and Bertha Pappenheim, as they represent radically different kinds of female subjects. Pappenheim was an active social worker, author, and political organizer. She founded both a journal to publish articles on the subject of women’s rights and the German Women’s Association, as well as many orphanages, community homes, and other institutions to support women and children. The story of Anna O, the founding myth of psychoanalysis, amplifies Pappenheim’s voice in a different register, while simultaneously pathologizing her as hysterical. Employing the fiercely original palates of these four creative performers, Clara Latham merges fantastical sonorities with earnest melodies, creating an uncanny mixture of camp and sincerity.

“An arresting soprano, in all senses” (LA Times), Alice Teyssier has appeared as a soloist with the San Diego Symphony, International Contemporary Ensemble, Talea Ensemble, the San Francisco New Music Players, Oberlin Contemporary Music Ensemble, and the Bach Collegium San Diego, amongst others. She is a regular guest to the Monday Evening Concerts series, where she has premiered numerous works—from Salvatore Sciarrino to Cassandra Miller. Alice resumes her role as “a virtuosic soloist” (SF Chronicle) this season with Monday Evening Concerts in Sciarrino’s ‘Aspern Suite’, with the 21st Century Consort in Lukas Foss’ ‘Time Cycle’, with Talea Ensemble in a new work by Nicolai Warsaae, and at UC San Diego in Pierre Boulez’s ‘Le Marteau Sans Maître’. With Michael Weyandt and Bradley Scott Rosen, she performs as The Atelier, a uniquely organized music-image-movement ensemble, which was featured on the 2016 Resonant Bodies Festival in New York.

Baritone Michael Weyandt continues to engage audiences with his “virile, ardent” singing and “notable characterizations” in a repertoire that spans from Handel’s earliest to living composers’ latest works. He most recently made his first appearance with the acclaimed International Contemporary Ensemble in the posthumous premier of Pauline Oliveros’s and IONE’s “phantom opera,” The Nubian Word for Flowers. He also recently debuted with New York City Opera in Angels in America and Hawaii Opera Theater in La Bohème, the premiere of a new work with his multidisciplinary troupe the Atelier at Brooklyn’s Resonant Bodies Festival, performances of Eight Songs for a Mad King and Kagel with the Talea Ensemble, and the staged premiere of selections from When Adonis Calls for Opera America’s New Works Forum.

Peter Evans is a trumpet player, and improvisor/composer based in New York City since 2003. Evans is part of a broad, hybridized scene of musical experimentation and his work cuts across a wide range of modern musical practices and traditions.  Peter is committed to the simultaneously self-determining and collaborative nature of musical improvisation as a compositional tool, and works with an ever-expanding group of musicians and composers in the creation of new music. His primary groups as a leader are the Peter Evans Ensemble and Being & Becoming (with Joel Ross and Max Jaffe).  In addition, Evans has been performing and recording solo trumpet music since 2002 and is widely recognized as a leading voice in the field, having released several recordings over the past decade.  He is a member of the cooperative groups Pulverize the Sound (with Mike Pride and Tim Dahl) and Rocket Science (with Evan Parker, Craig Taborn and Sam Pluta) and is constantly experimenting and forming new configurations with like minded players.  As a composer, he has been commissioned by the International Contemporary Ensemble (ICE), Yarn/Wire, the Donaueschingen Musiktage Festival, the Jerome Foundation’s Emerging Artist Program, and the Doris Duke Foundation. Evans has presented and/or performed his works at major festivals worldwide and tours his own groups extensively.  He has worked with some of the leading figures in new music:  John Zorn, Kassa Overall, Jim Black, Weasel Walter, Matana Roberts, Tyshawn Sorey, Levy Lorenzo, Nate Wooley, Steve Schick, Mary Halvorson, Joe McPhee and performs with both ICE and the Wet Ink Ensemble. He has been releasing recordings on his own label, More is More, since 2011.  2016 saw the release of the highly acclaimed solo album “Lifeblood” and “Genesis”, the third last record by the Peter Evans Quintet.

Emily Manzo is a musician that TimeOut New York considers “a uniquely protean artist who makes several scenes move.”  The New York Times has described her “attention to detail exceptional.” Emily frequently performs throughout the U.S. and Europe in concerts and festivals of chamber music, experimental music, and rock music. She is a member of the Julius Eastman Memory Depot, Till by Turning and Christy & Emily.  She is in two touring productions with the Bill T. Jones/Arnie Zane Dance Company.  She has premiered the works of John Luther Adams, Susie Ibarra, Angelica Negron, Nick Hallett and many others.  As a vocalist, composer and pianist she can be heard on Tzadik, New Amsterdam Records, SHSK’H, The Social Registry, Big Print, Klangbad, Merge, and Jagjaguar.  Her degrees were earned at the Oberlin Conservatory of Music and Columbia University. With funding from the Lewis B. and Dorothy Cullman Foundation, she has developed the Hey, Chopin! educational project, a recording of the complete Chopin Preludes.

Critiqued as “a cellist of power and grace” (The Guardian) and possessing “mature artistry and willingness to go to the brink,”Seth Parker Woods has established a reputation as a versatile artist straddling several genres. Outside of solo performances, he has performed with the Ictus Ensemble (Brussels, BE), Ensemble L’Arsenale (IT), zone Experimental (CH) Basel Sinfonietta (CH), New York City Ballet, Ensemble LPR and Orchestra of St. Luke’s (US). A fierce advocate for contemporary arts, he has collaborated and worked with a wide range of artists ranging from the likes of Louis Andriessen, Elliott Carter, Heinz Holliger, G.F. Haas, Helmut Lachenmann, Klaus Lang and Peter Eotvos to Peter Gabriel, Sting, Lou Reed, Dame Shirley Bassey, Rachael Yamagata, as well as visual artists Vanessa Beecroft, Jack Early, Adam Pendleton and Aldo Tambellini.

Librettist James Currie is a writer and performer and an Associate Professor in the Department of Music at the University at Buffalo SUNY. He has worked in collaboration with a number of composers, most notably the young Singapore composer Diana Soh, for whom he has written texts for commissions from IRCAM (“Arboretum: Of Myths and Trees,” 2013), Radio France (“A/Z” 2017), and the Singapore Symphony Orchestra (“Abugida,” 2018). He is also active as a performance artist and poet creating works that employ a hysterization of traditional dramatic techniques as a means of exploring the junctures at which the quotidian content of daily life and the abstract, such as in his theatre work “Examples of Excess.” The combination of processes that are at the same time more akin to musical practices with more normative modalities of dramatic and theatrical writing has led him to perform his works with musicians such as the acclaimed soprano Tony Arnold of the International Contemporary Ensemble (ICE).

Katherine Brook is a director of new experimental plays and performance and makes original work collaboratively with her theatre company, Katherine Brook / Tele-Violet. Her work has been presented at various venues in New York City and beyond, including The Public Theater’s Under the Radar Festival, The Provincetown Tennessee Williams Theatre Festival, Incubator Arts Project, Prelude NYC, and more. Her most recent work, The Power of Emotion: The Apartment premiered at Abrons Asts Center in October, 2017. Brook has also worked as a creative producer at The Foundry Theatre, The Builders Association, and New York City Players. She received her MFA from Carnegie Mellon University’s School of Drama.

Bertha the Mom was made possible by a grant from the American Composers Forum with funds provided by the Jerome Foundation. This performance is also made possible with generous funds from The Francis Goelet Charitable Lead Trusts. Bertha the Mom is supported with funds from GENERATE: The Frances Richard Fund for Innovative Artists of Promise, made possible, in part, by The National Endowment for the Arts, the New York State Council on the Arts, the New York City Department of Cultural Affairs, and Roulette’s generous audiences.
Facebook Twitter Link Email
Share
Tags
Artists: Alice Teyssier, Clara Latham, James Currie, Katerine Brook, Michael Weyandt, Peter Evans, Seth Parker Woods
Genres: GENERATE, Opera