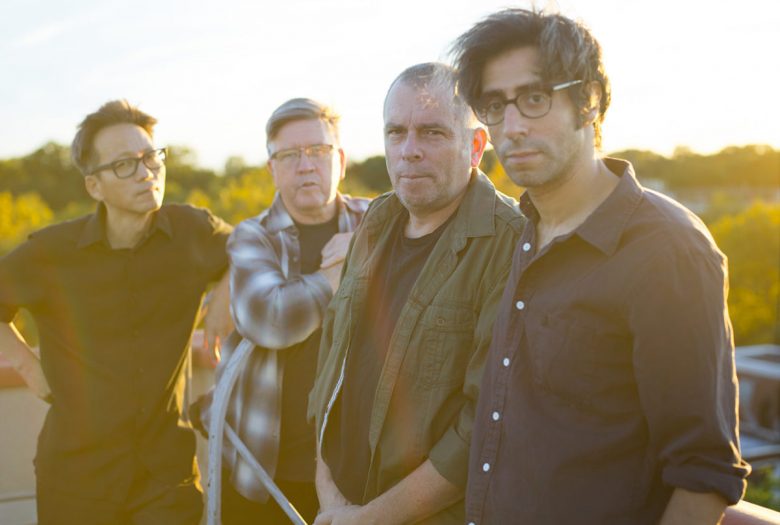 With the core of Chris Cochrane, Kevin Bud Jones, Kato Hideki, and Brian Chase, the fifteen-piece Collapsible Shoulder Big Band performs compositions from Chris Cochrane’s upcoming release—The Invention of Shoes—to be released Spring 2020. The evening also includes an assortment of left-of-center covers of favorite compositions and songs.  Collapsible Shoulder’s music is drawn from its members’ years in the downtown NYC and Brooklyn music scenes: neo-psychedelic with unpredictable twists and turns, an electronic-acoustic-sonic mash.

Chris Cochrane is a songwriter and guitarist who has been playing in New York since the 1980s.

Brian Chase is a Brooklyn-based drummer and composer. His diverse range of work includes that with rock band Yeah Yeah Yeahs, the community of the New York experimental music scene and Drums & Drones – an electro-acoustic project focused on applying principles of Just Intonation to drums and percussion

Kato Hideki is a bassist of Collapsible Shoulder since 2014 and co-produced and mixed their debut EP everywhere. His own projects include: Death Ambient with Ikue Mori and Fred Frith; Green Zone with Otomo Yoshihide and Uemura Masahiro; Tremolo of Joy with Charles Burnham, Briggan Krauss, Ed Tomney and Calvin Weston; OMNI wtih Nakamura Toshimaru  and Akiyama Tetsuji; Plastic Spoon with Karen Mantler, Douglas Wieselman and Shahzad Ismaily; and the solo works Hope & Despair and Turbulent Zone.

Eszter Balint is a singer-songwriter performer violinist and actress. She has recorded three critically acclaimed solo albums and is currently at work on a theatrical song cycle.

Composer/pianist/organist Gordon Beeferman, “a wide-eyed polymath who masterfully toes the lines of myriad genres” (Brooklyn Rail), has created and performed innovative opera, chamber and orchestra music, avant-jazz, and numerous collaborations with choreographers, writers, and other artists in New York and internationally.

Gelsey Bell is a singer, songwriter, and scholar – a member of thingNY, Varispeed, and the Chutneys. She is currently a resident artist at the HERE Arts Center, has recieved a Foundation for Contemporary Arts award in music/sound, and has been a resident artist at Roulette.

Sarah Bernstein is a composer, violinist, vocalist and poet. Her work ranges from acoustic chamber music to electronic multi-disciplinary performance to vocal-driven pop. She leads bands, performs solo, and is an active collaborator in the NYC vanguard. sarahbernstein.com

Richard Dworkin has been playing with James Chance since the late 1980s. Other long-term musical engagements have included Alex Chilton, The Microscopic Septet, and Fast ‘n Bulbous (with Gary Lucas).

Hanna Fox is a drummer and one fourth of Babe the Blue Ox. She is also a co-founder of Willie Mae Rock Camp for Girls, a music and mentoring program in New York City that empowers girls, women, and gender non-conforming youth and adults through music education, volunteerism, and activities that foster self-respect, leadership skills, creativity, critical thinking, and collaboration.

Killian Karlsson is a guitarist who is well versed in many genres, and is currently mainly involved with NYC based Neo Soul outfit “Garth”.

Stuart Popejoy is a bassist, keyboardist, composer and software developer, leader of the avant-riffmetal trio Bassoon, and collaborator in unique projects such as Sugarlife with Christian Dautresme and Day So Far with Sarah Bernstein, and Pamelia Stickney’s Transcendental Dissonance chamber quartet with Danny Tunick and Sarah Bernstein. A native of Albuquerque New Mexico, Stuart lives in Brooklyn, NY.

Jim Pugliese has been a drummer, percussionist and composer for a long time.

Stew is a singer/songwriting theater dabbler, educator & leader of The Negro Problem who co-created Passing Strange, The Total Bent and Notes of A Native Song.

Vocalist, singer/songwriter, and guitarist Syd Straw first made a name for herself as part of the Golden Palominos, a band led by Anton Fier that enjoyed a cult following in the 1980s. Her Capricorn Records debut, War and Peace, was released in 1996, and since then, her unique blend of folk-rock and blues-rock has found a home with Triple A (adult album alternative) radio stations and their audiences around the country.