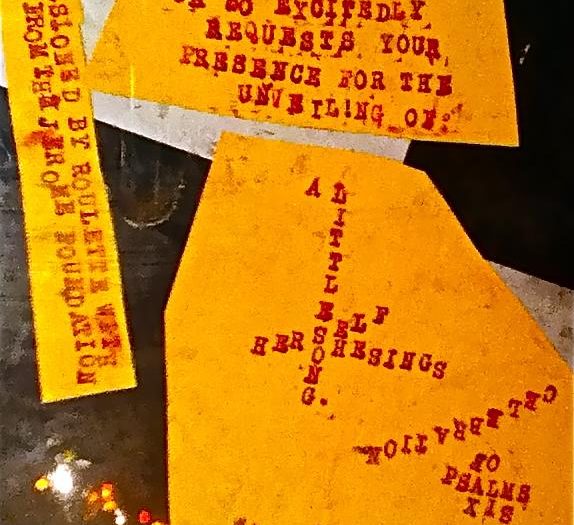 The Ashcan Orchestra will present a 2 part evening of music, culminating in the premiere of a collection of  electro-mechanical instruments, and a new work for the instruments and voice,” Shesings Herself a Littlesong: 6 psalms of celebration.” The instruments were designed  from handbells, slide whistles, and other noisemakers to be interfaced and automated by light, sound, and other sensors using simple CMOS digital logic chips, and mechanical memory. The first part of the evening will consist of new and old pieces, focused on the musical concepts that lead to a fascination and implantation of Boolean logic into the instruments. After a brief reset, the instruments will comprise a chamber ensemble sized “music-box” with performers using sound and light to “steer” the new work, which also bears the influence of the rules of logic in its musical language.

The Ashcan Orchestra presents a collection of new electro-mechanical toy instruments, and new works. The instruments will be built from handbells, toy pianos, slide whistles, and percussion and be automated by light, sound, and other sensors using simple CMOS digital logic chips, and mechanical memory. The first part of the evening will consist of new pieces for the individual instruments and ensemble. In the second half, the instruments will comprise a chamber ensemble sized “music box” with performers using sound and light to play a longer theatrical composition which uses the rules of digital logic, inherent to their electronics, as musical material.

The Ashcan Orchestra is simultaneously the audio/visual work of composer P. Spadine, a collection of toy, re-appropriated, and homemade instruments, and an revolving performance ensemble based in NYC since 2007. On stages and basements, indoors and out, it has been presenting new music and rituals in celebration and emulation of the physics and mathematics that bind the known universe.

[COMMISSION] Ashcan Orchestra: New Instruments and New Works is made possible, in part, by the Jerome Foundation.