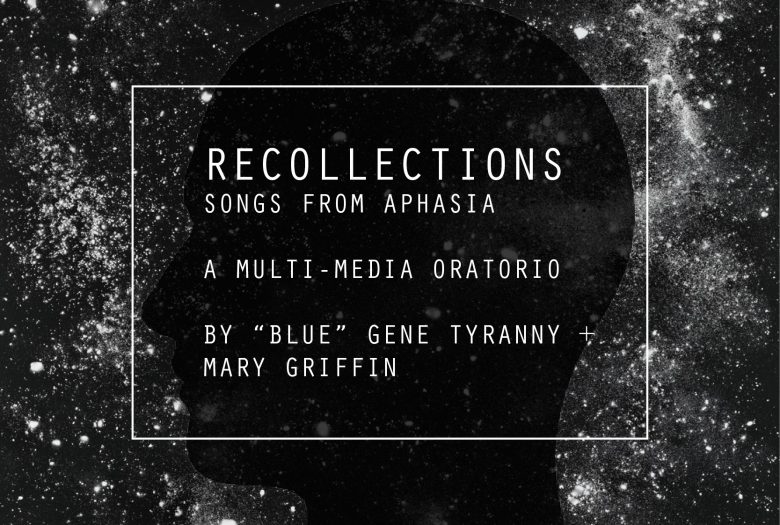 This multi-media oratorio, a collaboration between “Blue” Gene Tyranny and Mary Griffin draws its inspiration from the “Aphasians” — people who lost their ability to speak as a result of strokes, traumatic brain injuries, or other kinds of brain damage, and who are reclaiming their memories and their language.

The piece is structured on a series of songs on the themes of memory, speech, and heroic determination written by Griffin and scored by Tyranny for a string ensemble — Conrad Harris, James Ilgenfritz, Pauline Kim, Alexander Waterman, and Lev Zhurbin — and four singers — Eric Barsness, Magda Gartner, Diana Solomon Glover and Peter Stewart. The Music Director is composer Chris Berg.

Staged within a video projection environment created by Ursula Scherrer, the songs are punctuated with short excerpts from audio and video interviews with aphasia survivors — Yelena Balandina, June Chu, Herbert Frenkel, M.D., Thelma Hudgins, Yair Kagan, Barbara Peters, and Andy Polon, These video excerpts are accompanied by pre-recorded sound by Tyranny, and animated word graphics. Other songs, such as “You Are My Sunshine”, a chestnut which the Aphasia survivors sing repeatedly as part of their therapy, is a central musical theme, appearing in various modalities of American music — Appalachian, Jazz, Cajun, and experimental electronics.

Recollections: Songs from Aphasia is a co-production of Providence Productions International, Inc. and Roulette, supported by generous grants from The MAP Fund, supported by the Doris Duke Charitable Foundation and the Andrew W. Mellon Foundation, the New York State Council on the Arts, a state agency, and mediaThe Foundation.

Composer/pianist Robert Sheff became “Blue” Gene Tyranny for the Genetic Transformations, a performance piece he created while touring with a rock band in the early 1970’s “Blue’s” compositions include The Driver’s Son (a 36-scene audio-storyboard for voices, orchestra and electronics), a song cycle, Somewhere in Arizona, The Invention of Memory, the field research procedure Archaeo-acoustics, How To Discover Music In The Sounds Of Your Daily Life, The Keys, and Holding Hands; Harvey Milk (Portrait) and Random Arrest, The Drifter and The De-certified Highway of Dreams. He composed the harmonies (chords) and piano improvisations for the original text of Robert Ashley’s opera-for-television “Perfect Lives” and has also created dance, theatre and film scores. “Blue” has received  Obie, and Bessie Awards, been nominated for a Grammy, and has worked with Laurie Anderson, Robert Ashley, Carla Bley, John Cage, Leroy Jenkins, Iggy Pop, and many others. His pianism and spontaneous playing have received enthusiastic reviews: “The most inspired piano performance I’ve ever heard…God plays the piano through this man…”(Village Voice), “Tyranny reaches for the heart, not only the mind” (i/e). The Grammy-nominated “Take Your Time” and previous recordings are available from Lovely Music, CRI, New World, and Nonesuch/Elektra. “Detours” (2012) and a forthcoming re-issue of a 1979 work “Trust in Rock” are produced by Unseen Worlds. “Blue’s”  music is discussed in N. V. Gagne’s Sonic Transports and Soundpieces 2, W. Duckworth’s Talking Music, K. Gann’s American Music in the 20th Century, and in numerous other publications.

A new work commissioned by Tom Buckner for voice and piano, “Solving Scriabin’s Chord (Love, Consider, Imagine)”, premieres at Four Seasons Arts in Berkeley, CA on March 5th, 2016 and will be performed at Roulette on May 5th, 2016.

Mary Griffin writes poetry, and librettos. She has worked with composer Joseph Hannan with whom she has written Christina the Astonishing: Patron Saint of Psychiatrists, and Lovers and Sick Cattle, the first two sections of a trilogy of operas based on the lives of saints, and Nil Nisi Bonum, a shaggy dog elegy. She has also collaborated with composer Frankie Mann on I land (Roulette TV https://vimeo.com/11311808) Her most recent work is the libretto for Coincidents, an opera with music by Leroy Jenkins and video by Hisao Ihara. Her work has been produced at the Whitney Museum, 651 Arts, Roulette, The Delaware Valley Opera, The Kitchen, Chapter Art Center, and The Performing Garage, and has been supported by residencies and fellowships from The New York Foundation for the Arts, Rensselear Polytechnic Institute, Meet the Composer, Atlantic Center for the Arts, and by grants from The Phaedrus Foundation, the MAP Fund, mediaThe, the New York State Council on the Arts and the Lifton Foundation. Griffin is also a producer of other artists’ works, an interest that began when she was Director of The Kitchen (78-84), and continues in her work with Carlota Schoolman and Providence Productions.

Providence Productions International (PPI) was founded in 1978 in response to artists’ needs for production support. In the last thirty years PPI has produced and presented the work of scores of artists including Maryanne Amacher, Ann Carlson, Diamanda Galas, Ap Gorny, Nancy Holt, Ron Kuivila, Homer Jackson, Leroy Jenkins, Ishmael Houston Jones, George E. Lewis, Myra Melford, Pepón Osorio, Merián Soto, Dawn Saito, and Elizabeth Streb.  We have presented the artists’ work at such venues as The Whitney, Merkin Concert Hall, Roulette, The Walker Art Center, The Kitchen, and, in collaboration with Tyler School of Art, at The Philadelphia Museum of Art, The Painted Bride, The Franklin Institute and in community halls and public spaces.

The IAM – International Aphasia Movement was founded by Harvey N. Alter and Michael A. Young, Esq. in 2001 to provide support and free therapy for people with speech and learning problems due to the disability of aphasia caused by a brain injury. Groups are held in several locations. Sessions at Mount Sinai/Beth Israel and The Church of St. Luke in the Fields are conducted by professional and licensed Speech-Language Pathologists. Groups at Hunter College, Teachers College Columbia University, and Brooklyn College are conducted by Graduate Student Clinicians under the supervision of licensed Senior Supervisors. For information about IAM, please contact Carlota Schoolman (917-532-7936), carlotaschoolman@gmail.com, aphasianyc.org.