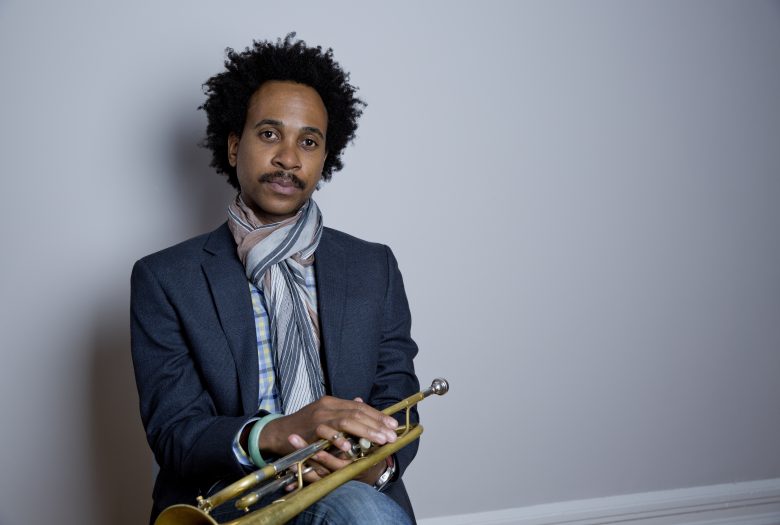 For his Commission at Roulette, Jonathan Finalyson has set to music selected poems by renowned Harlem Renaissance poet Sterling Brown, whose work was deeply influenced by jazz—a performance catalyzed from a series of coffee shop conversations with Andre Solomon-Glover over the course of several years.

Jonathan Finlayson has been recognized by the New York Times as “…an incisive and often surprising trumpeter,” who is “…fascinated with composition.” Born in 1982 in Berkeley, CA, Finlayson began playing the trumpet at the age of ten in the Oakland public school system. He came under the tutelage of Bay Area legend Robert Porter, a veteran trumpeter from the bebop era who took Finlayson under his wing; he was often seen accompanying Porter on his gigs about town and sitting in on the popular Sunday nights jam session at the Bird Cage. He subsequently attended the New School for Jazz and Contemporary Music where he studied with Eddie Henderson, Jimmy Owens and Cecil Bridgewater. Finlayson is a disciple of the saxophonist/composer/conceptualist Steve Coleman, having joined his band Five Elements in 2000 at the age of 18. He is widely admired for his ability to tackle cutting-edge musical concepts with aplomb. Finlayson has performed and recorded in groups led by Steve Lehman, Mary Halvorson, Craig Taborn, Henry Threadgill and played alongside notables such as Von Freeman, Jason Moran, Dafnis Prieto and Vijay Iyer.

Born and raised in New York, Craig Weinrib graduated from Columbia University in 2010 and has since established himself as an “insightful [player] bound by a quality of assertive selflessness,” according to Nate Chinen of the New York Times. Weinrib has collaborated with some of the world’s most innovative artists in sound, including Pulitzer Prize-winning composer and multi-instrumentalist Henry Threadgill, Ravi Coltrane, Jonathan Finlayson, David Virelles, and Jason Moran.

The American baritone, André Solomon-Glover, studied at Deland Senior High School in West DeLand, Florida (1976-1979) and University of South Florida in Tampa, Florida, where he obtained his degree in Vocal Performance (1979-1984). As a student of art-song, he has studied with such luminaries as Virgil Thomson, Adele Addison, Betty Allen, Jorma Hynninen, and Robert McFerrin. His commitment to this literature won him the “Joy In Singing” prize in 1990.

David Bryant currently resides in Manhattan. He is a regular member of the Steve Davis Quintet, Myron Walden/Darren Barrett Quintet, Jen Shyu’s Jade Tongue and James “Jabbo” Ware’s Orchestra. He has also played with the likes of Ravi Coltrane, Roy Haynes, Dave Holland, Jimmy Heath, Steve Coleman, Kenny Wheeler, Wynton Marsalis, Eddie Henderson, Bob Brookmeyer, George Garzone, Eric McPherson, Abraham Burton, and many others in the New York and international jazz scene. He has performed and can be seen in clubs such as Birdland, the Iridium, the Jazz Standard, the Jazz Gallery, Carnegie Hall, Alice Tully Hall, the 55 Bar, Barbes, the Knitting Factory, Zebulon, the Jazz Bakery, and the Cotton Club in Tokyo. He has currently recorded projects with Steve Davis, Myron Walden, and Abraham Burton as well as recording and performing with various projects of his own.

Christopher Tordini is a bassist on the New York music scene, where he performs with established jazz icons as well as a diverse range of emerging musicians. He has toured and recorded with Andy Milne’s Dapp Theory and has also played and recorded in bands led by artists such as Greg Osby, Jeremy Pelt, Ari Hoening, Steve Lehman, Jim Black, Andrew D’Angelo, and the Becca Stevens Band. Tordini is also a collaborator in projects led by drummer/composer Tyshawn Sorey and trombonist/composer Michael Dessen.