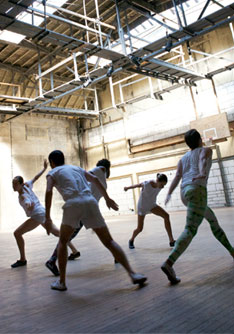 Biba Bell and Ben Hall present three works: Mouth w/ Objects, THE BELLS, and Cold Vein. Mouth w/ Objects dances things without saying so. The mouth and its objects force ventriloquist moans across the body that stammer and collapse distances of communication. THE BELLS traces localized geographies over a choreography, an architecture, a city, excavating the characteristics of daily life. Cold Vein is a dance through proxy, proposing a lack of adornment as singularity, where one voice vibrates into three. Bell and Hall are based in New York City and Detroit.

Biba Bell (b. 1976, Sebastopol, CA) is a choreographer, dancer, and writer based in Detroit and NYC.  She is a member of the collaborative trio MGM Grand (Modern Garage Movement) with Jmy Leary and Paige Martin, represented by Callicoon Fine Arts in NYC. She is a PhD candidate in the department of performance studies at New York University writing her dissertation about issues of site specificity in contemporary choreographic practice. She teaches at NYU and Wayne State University. Bell’s work has most recently been presented at the Garage for Contemporary Culture in Moscow, The Garage in San Francisco, and the Jam Handy and the Detroit Institute of Art in Detroit. She delivered a talk on post/para studio dance for the Movement Research Festival 2012’s Studies Project. Bell also currently works with artists Maria Hassabi, FACADE/FASAD, Walter Dundervill, Xavier Cha, Davide Balula, and Ben Hall.

Ben Hall received his B.A. from Bennington College, studying Quaker-based mediation, painting and percussion and his MFA from Columbia University where he studied with Rirkrit Tiravanija, Sarah Sze and Liam Gillick. Hall splits time between Harlem and his native Detroit where, as a co-owner of the Russell St. Deli, he works as an advocate around issues of food, hunger and obesity, including membership in the Garden Resource Program/ Detroit Agricultural Network which provides support and infrastructure for urban farming initiatives, the Restaurant Opportunities Center which works towards improving working conditions and increasing opportunities for the advancement of low-wage employees in restaurants, as a fundraiser for Gleaners Community Food Bank and the Capuchin Soup Kitchen and as a chef/teacher for Share Our Strength which develops cooking, shopping and nutritional skills in at-risk and low-income communities. Recent projects include Bap-Tizum.com an open source survey of Black American spiritual music. Recents exhibitions include Spatial City at the Museum of Contemporary Art Detroit and Outside Mediation at the Green Gallery at Yale University. Recent fellowships includes Socrates Sculpture Park Emerging Artist Fellowship 2012 in NYC. Recent publications include an interview in The History of American Graffiti as well as writing reviews for UK music magazine The Wire.