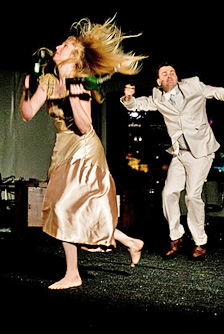 The Victory Project is an interactive duet installation between composer/electronic musician, Ryan Ingebritsen and performance/dance artist, Erica Mott. Victory Project presents a series of trans-disciplinary performances that incorporate interactive image, sound, text, movement and sculptural objects to dismantle allegories that confuse and conflate patriotism and perversity. Beginning with the inquiry into whether or not the concept of ‘victory’ is a gendered notion, the performances examine the female body as tool, symbol, bounty, and weapon during and post conflict.

Structurally the performance cultivates an interdependency between movement and sound, allowing the body to become musical instrument both dictating musical composition and moving in ways to serve the sonic score. The touring version of the Victory Project features choreography, object design and performance by Mott, sound composition and performance by Ingebritsen, interactive video design by John Boesche, light design by Todd Clark, and dramaturgy by Ginger Farley.

Composer, sound designer, and electronic performer Ryan Ingebritsen‘s music and sound art focus on the multi-dimensional aspects of sound while attaining a degree of clarity and lyricism to permeate and reveal the musical structures he creates. His music challenges performers to extend beyond themselves into the realm of interaction with visual, electronic, and natural experience providing audiences a window to observe our multi-dimensional universe through the interplay and interaction of sound. A graduate of St. Olaf College and the University of Cincinnati, he won a Fulbright scholarship to Poland where he studied under Zbigniew Bujarski and Marek Choloniewski. He has collaborated with and been commissioned by artists such as Todd Reynolds (bang on a can), International Contemporary Ensemble, Third Coast Percussion, Beta Collide, Firewire, Till by Turring, Gold Sparkle and Stars Like Fleas. As a sound designer and engineer, he has worked with groups such as Grammy award winning ensemble eighth blackbird, International Contemporary Ensemble (ICE) and has premiered works by Steve Reich, David Lang, Julia Wolf, Michael Gordon, and Steve Mackey. He has designed sound for the Tune In festival at the Park Avenue Armory including the New York premier of John Luther Adams’ Iniksuit as well as for the 2011 Reich 75th birthday celebration in Millennium Park.