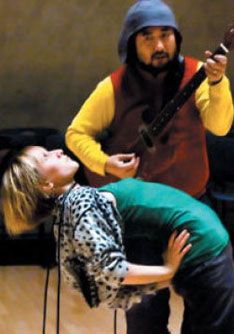 For this night at Roulette choreographer and dancer Melanie Maar invited composers, vocalist Shelley Hirsch and musician Kenta Nagai, to further explore performance in terms of situational choreography and composition.  Maar has been working with several musicians and dancers over the last years, creating performances in which a theatrical aesthetic and the artists improvisational selves feed each other. The emphasis lies on the attention to the specific visual, structural, sonic, and kinetic elements that are coming together anew in each performance experience. The body as an instrument and the instrument as a body. Maar is  approaching dance, music and audience relationship as a symbiotic and empathetic performance practice.

Melanie Maar is a New York based choreographer and dancer originally from Vienna, Austria. She runs a space in Brooklyn called the Loft. Her latest project Same Selves is a trio with performer Marilyn Maywald and musician Taylor Ho Bynum. Her evening work Spaces and Bones was a collaboration with audio-visual artist Kenta Nagai commissioned by The Chocolate Factory NYC in 2010. It was presented at Impuls Tanz Festival Vienna in 2011. In 2010 Maar co- curated the Movement Research Festival HARDCORPS. In 2009 her piece Phenomenal Bodies premiered at New York Live Arts (formerly DTW). She is currently a member of Quartet Collective with Taylor Ho Bynum, Rachel Bernsen and Abraham Gomez-Delgado. Experimenting with the body of music in performance, this project just returned from their first tour through several cities in Europe.  Maar was also part of a new project by composer Anthony Braxton, called Pine Top Aerial Music. As a dancer Maar has worked with NY choreographers Luciana Achugar and RoseAnne Spradlin and Daria Fain amongst others.
www.melaniemaar.com

Kenta Nagai is an audio-visual artist and performer, originally from Niigata Japan. His keen sense of physicality is reflected in his current exploration of the physical properties of sound and its impact on human emotion and the body. This interest has led to numerous collaborations with dancers (Boaz and Anika K Barkan, Daria Fain, DD Dorvillier, Bob Eisen, Zack Fuller and Jennifer Monson among others) throughout his career as an improvisor and performer in New York City and abroad. Nagai has appeared in numerous concerts at venues including Carnegie Hall, Roulette, Issue Project Room, Lincoln Center Out Door Stage, Rubin Museum, Hershhorn Museum at Smithonian Institute, Sculpture Center, Japan Society and the Whitney Museum of American Art.