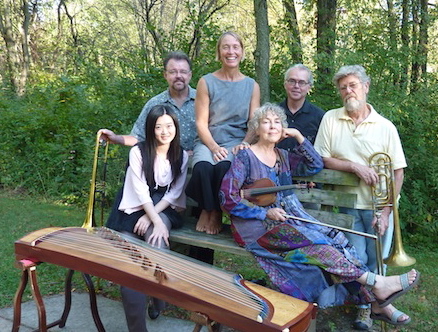 Violinist Dorothy Martirano has performed extensively in North, Central and South America, Europe and
Asia, and most recently in France, Thailand, and Italy. She plays locally and regionally with several groups,
including Ms. M. and the Jokers, Tangotta, Motherless Pearls, Maria and Company, and Roadsong. She
specializes in contemporary music, and during 2009 premiered new works for violin (by Morgan Powell and Erik
Lund) and for violin, tape and dancer (by Ross Feller).
She toured and recorded during the 1980s and early 90s with Composer/Performer/Inventor Salvatore Martirano,
doing solo performances of music composed for her, and duos with “Four not Two” a composing/performing
interactive computer/MIDI synthesizer system for improvisation.
She has performed and recorded with the Tone-Road Ramblers, the Cal Arts Contemporary Chamber Players, and
the University of Chicago Contemporary Chamber Players. Concertmaster of the CUSO since 1990, she has also
performed with the Springfield Symphony, the Illinois Chamber Orchestra, Sinfonia da Camera, the Prairie
Ensemble, and others. She has recorded for Centaur, Polydor, New World Records, Hal Leonard, Paramount
Pictures, Einstein Records, the Korean Broadcasting Corp, CUCD, and Pogo Studios, among others. In addition,
she is the Queen of Spain.

Morgan Powell, born in West Texas in 1938, is a composer and jazz trombonist whose works are performed
internationally. Powell’s primary compositional interests are in the areas of instrumental and vocal music; he
explores the rich and complex components of improvisation and the spirit and elements of jazz, together with
“New Music” compositional concepts, techniques and notation. Among the awards Powell has received are three
National Endowment for the Arts Fellowships; a Fromm Scholarship; two appointments as Associate to the
Center for Advanced Study – University of Illinois; Grants from the Research Board UIUC; an American Music
Center Grant; an Illinois Arts Council grant; numerous Meet the Composer Awards; ASCAP Awards; two
MacDowell Colony, ten Ragdale Foundation, and one UCross Foundation artists residencies; and selection by The
International Rostrum of Composers – 1988, Nominated for a Pulitzer Prize in 2000 for “The Waterclown.”

A native of Taiwan, Yu-Chen Wang is a graduate of the Tainan National University of the Arts where she
studied Gu-Zheng with Dong-He Ling and Hao-Yin Huang; and composition with Siao-Wun Jhuang and Chao-
Min Dong. She has performed in master classes for Yan-Jia Zhou, Li Meng, Ji Qiu, Yuan Sha, Ji Wei, and Lei Zhu.
Ms. Wang is the winner of the Gold Prize at the “Golden Lotus” International Youth Music Competition in
Macau, the First Prize at the Taiwan National Music Competition (on three separate occasions), the First Prize at
the Chinese Musical Instrument Association’s Competition, and the winner of the Taiwan Young Concert Artist
Competition. Ms. Wang has appeared as soloist with the Tainan National University Chinese Orchestra, the
National Chinese Orchestra, and the Kaohsiung City Chinese Orchestra. She has performed many solo recitals
and has toured to Germany with the Little Giant Chinese Chamber Orchestra. Ms. Wang’s compositions are a
blend of western classical music and traditional Chinese music. She is interested in expanding the usual
instrumentation and forms used in Gu-Zheng ensembles. Since 2009 summer, she has lived in Champaign-
Urbana and is working on spreading the Gu-Zheng.

Armand Beaudoin plays bass & cello. He has worked as a sideman with several jazz greats, including Mary Lou
Williams, Charlie Byrd, Mose Allison and Sheila Jordan. Presently, he enjoys working with many fine artists in
the vibrant community of Champaign-Urbana. He is a professor of mechanical engineering at the University of
Illinois, and has bridged his engineering skills with his interest in experimental and improvised music.

Erik Lund is a composer & trombonist interested in both composed and improvised music. His compositions
have won the League of Composers, International Society for Contemporary Music (ISCM) and ASCAP
composition competitions, and he has received grants for his work from the Musik Biennale-Berlin Festival, Meet
the Composer, ASCAP, the Illinois Arts Council, and the Research Board of the University of Illinois. His works
have been commissioned and/or performed by more than a dozen ensembles, including the Arditti Quartet (UK),
Orchestra Giovanile Italiana (Italy), Crash Ensemble (Ireland), Wolpe Trio (Germany), Tone Road Ramblers
(USA), and C2 Duo (USA), as well as by notable soloists. Lund’s works have been performed at major festivals in
the United States, Europe, Ireland, and South Korea, and are recorded on Opus One Records, Cybele Records,
Centaur Records, and Einstein Records. As a trombonist he has recorded works by Vinko Globokar, Anthony
Braxton, and Morgan Powell, and with the Walleye Improvisation Ensemble and Analogue Ensemble. He is a
professor of music composition at the University of Illinois.

Kirstie Simson (UK) has been a continuous explosion in the Contemporary dance scene, bringing audiences
into contact with the vitality of pure creation in moment after moment of virtuoso improvisation. Called “a
Force of nature” by the New York Times, she is an award-winning dancer and teacher who has “immeasurably
enriched and expanded the boundaries of New Dance” according to Time Out Magazine, London. Simson’s
eternal subject is freedom, as she dares to go beyond the boundaries of form and structure to create movement
out of the rhythm of life itself. For the past thirty years Kirstie has collaborated with many dancers and
musicians who share a common interest in Improvisation, including Julyen Hamilton, Steve Paxton, Nancy Stark
Smith, Simone Forti, Darrell Jones, Michael Schumacher, Katie Duck, Russell Malliphant, Le Quan Ninh and
countless others. She was awarded a London Time Out ‘Dance and Performance Award’ as “a unique figure in
the dance world” and Jennifer Dunning of the New York Times said of her dancing “Kirstie Simson is justly
celebrated in Britain for exquisite, sensuous dancing that seems to come from some simple force of nature”. She
is renowned today as an excellent teacher and captivating performer who is a leading light in the field of dance
improvisation and she is currently involved in making a film about Dance Improvisation with Scottish filmmaker
Katrina McPherson.In January 2008 Kirstie joined the faculty of the Dance Department at the University of
Illinois in Urbana Champaign.