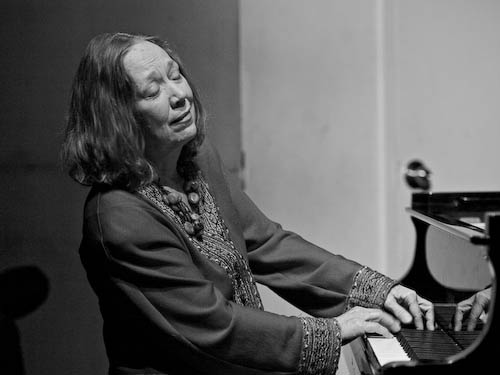 Connie Crothers, pianist, will improvise solo and duo with Ben Manley, electroacoustic improviser. The duo, through the expression of their respective instruments, will create ambient resonance in the performance space. The piano will be situated in the center of the room. Speakers will be arranged around the circumference of the room. Crothers, the visual, as well as the aural center, will converse spontaneously with Manley’s continuously shifting, resonating ambient sound resulting in a dynamic musical environment, interspersed with solos throughout.

“A lioness on the keyboard,” (Jazz Nu) Crothers has been an active member of the New York jazz scene for over forty years. She has performed at Carnegie Recital Hall, the Berlin Jazztage, the New Music America festival, the Vision Festival, the Village Vanguard and other such venues throughout the city. She has released recordings with the SteepleChase, Jazz Records, and New Artist labels, the last of which she co-founded with composer/percussionist Max Roach. Recently, her quartet with Richard Tabnik, Roger Mancuso and Sean Smith has been receiving rave reviews. In the January 2000 issue of Cadence, she was chosen for inclusion in the selection of the most important and influential musicians in the last twenty-five years.

Manley is a composer and experimenter known for his exploration of real-time interactions between diverse electroacoustic sources to make the most of the musical moment—to generate a dynamic environment from the natural variability of wind, amplified small vibrations, and resonant spaces. He has collaborated with Sean G. Meehan, Dan Evans Farkas, Jens Brand and others, and has appeared with Composers Inside Electronics at the Lincoln Center and with Essential Music and the Downtown Ensemble.