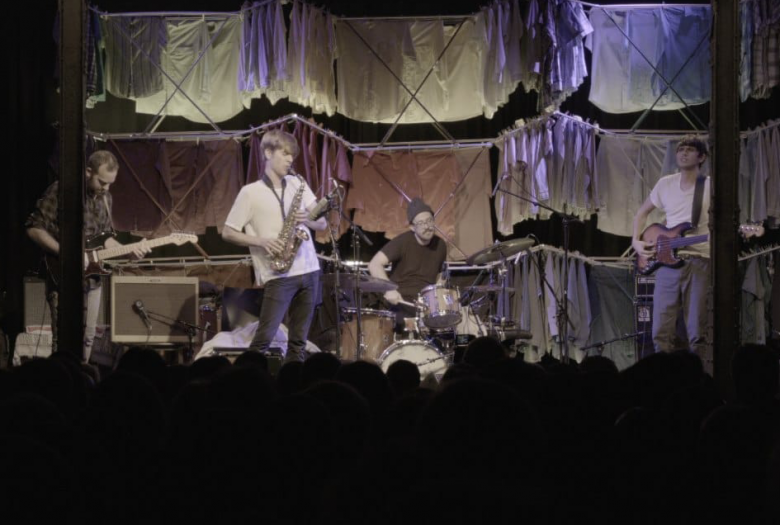 Saxophonist Chris Pitsiokos‘s “ever-evolving and mind-frying CP Unit” (Brooklyn Rail)—with guitarist Sam Lisabeth, bassist Henry Fraser, and Anteloper drummer Jason Nazary—celebrates the release of their new album One Foot on the Ground Smoking Mirror Shakedown on Ramp Local Records. To celebrate the release, Pitsiokos has written an extended (approx. one hour-long) piece for CP Unit augmented by three outstanding string players: Joanna Mattrey (viola), Webb Crawford (guitar), and Aliya Ultan (cello). Formally speaking, the piece, called Nucleotidally Encoded Revelations, allows for structural decisions to be made by the performers in the process of performance. In this way, it builds on the work of Christian Wolff, John Zorn, and George Lewis. Thematically, Nucleotidally Encoded Revelations explores the possibility—the successes and the failures—of syncretism across the world’s ideologies. This performance will be a world premiere.

Chris Pitsiokos (b. 1990) is a Brooklyn-based saxophonist, composer and improviser. His compositions often provide a framework for performers to express a singular aesthetic vision without subjugating their voices as creative agents in their own right. In this way his work contrasts with traditional modes of composition in which the composer or band leader is the sole, or primary, arbiter of a unified, preconceived vision. He has performed on five continents at major festivals and worked with luminaries such as Otomo Yoshihide, Miya Masaoka, Tyshawn Sorey, Jaimie Branch, Peter Evans, and Nate Wooley.

Guitarist and multi-instrumentalist Sam Lisabeth is a member of New York based psychedelic rock band Guerilla Toss. He keeps a busy touring schedule year round, playing all over North America and Europe including stops at major festivals, such as Moers Festival (Germany), Jazz Jantar (Poland), and Wels Unlimited (Austria). Sam tries to keep improvisation at the root of all his musical endeavors.

Henry Fraser (b.1991) is a double bassist, bass guitarist and composer based in Brooklyn, NY. Henry can be heard playing in many of NYC’s most exciting groups, such as the Brandon Seabrook Trio, Sam
Weinberg’s Bloor, CP Unit, Ryan Power, and The Anthony Coleman Trio, as well as improvising with regular collaborators, including John McCowen, & Weasel Walter. Henry’s solo double bass music (documented on his releases Buzzed & as is the morning, is) explores the physical processes of technique, as well as the notion of biofeedback between instrumentalist and instrument, as an aesthetic end-in-itself. As a composer, Henry has been commissioned by The Rivers School Conservatory’s 42nd annual Seminar on Contemporary Music for the Young (2020).

Jason Nazary is a drummer/producer/improviser/composer from Atlanta and based in Brooklyn. Nazary has been a force in New York’s creative music scene for over a decade. He’s released two records under his solo project, So Ghost, that explore the use of acoustic drums as trigger and control sources for electronic instruments in the context of raw, minimalist composition and improvisation. He also co-leads a number of ensembles, among them the dystopian electro noise duo Clebs with singer Emilie Weibel, Anteloper, an improvising modular beat shredding duo with trumpeter/juno explorer Jaimie Branch, Bear In Heaven, a psychedelic, synth heavy indie rock band, and Little Women, a noise meets free jazz, soul quartet.

Joanna Mattrey is a violist active in both the new music and free improvisation communities who’s playing often incorporates textural gestures, preparations, and electronic alterations. She is searching for moments of ceremony and ritual in a modern soundscape. Mattrey has played with such luminaries as Marc Ribot and the Young Philadelphians, Mary Halvorson, John Zorn, Erik Friedlander, Nick Dunston, and others among in New York City’s Downtown scene.

Aliya Ultan utilizes her voice as a mechanism to communicate vulnerability that is unfettered by sociality. When in combination with her cello playing, Ultan uses both instruments to contort pitch centers and reconstruct sonic spaces. This has led her to create various techniques such as particular ways of detuning the cello to expand its range, allowing it to cross instrumental bounds. By rethinking certain mannerisms (assumptions) applied to the cello, Ultan has extensive documentation of her techniques that detail a new perspective on the anatomy of the cello.

Webb Crawford is a guitarist, composer and luthier from the Lower East Side. She is very interested in making cartoon noises on hand-built stringed instruments. She studied with Mary Halvorson, worked
with Mark Stewart of Bang on a Can to restore the instruments of Gunnar Schonbeck for a playable exhibit at the Massachusetts Museum of Contemporary Art, bashes trash with environmentalist and instrument-building collective Bash the Trash, and has performed with Nick Dunston, Adam O’Farrill, Alfredo Cólon, Lisa Hoppe, Lesley Mok, Roy Nathanson’s Sotto Voce, Debbie Harry, and Joe McPhee.