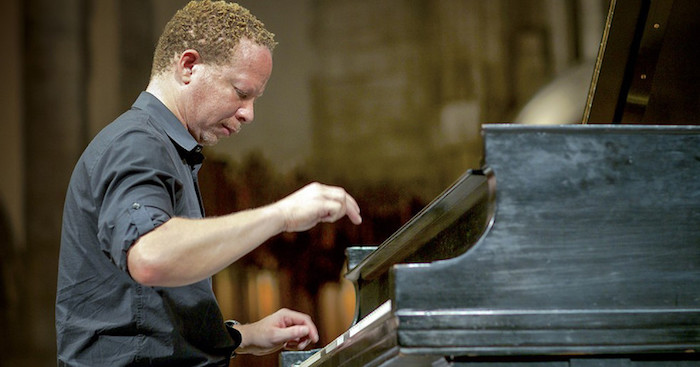 “[Taborn’s Chants]… confirms his standing as an inspired bandleader-composer, one of the smartest and slipperiest in his peer group” –The New York Times

Just as 2011’s Avenging Angel subverted expectations of solo improvised piano, so does Taborn’s Chants (ECM Records) find its own response to the vast tradition of the piano trios. The pieces that Taborn has been writing for the band in the eight years of its existence are set up to generate a new group music by channelling the special skills of drummer Gerald Cleaver and bassist Thomas Morgan. “I knew that if I created a context and then deferred, fully, to Gerald’s and Thomas’s sensibilities it would inherently be stimulating and would also challenge the context. I wanted to invite that challenge: I’d much rather engage with the group, always, than have the format be ‘piano adventures with supporting cast.’” Morgan and Cleaver share the leader’s concern for compositional shape and multi-layered improvisational detail, and as the music is pulled between the poles of density and spaciousness, to dramatic and thrilling effect. The music of Chants will be further explored and celebrated by the group at Roulette tonight.

Craig Taborn began his studies in music theory and composition with university teachers for two years at high school. While still a university student at the University of Michigan, he became known for his membership of saxophonist James Carter’s band, and contributed to a series of albums, beginning with JC on the Set in 1993. Taborn cut his first recording as leader came in 1994 with the Craig Taborn Trio. During the 1990s Taborn worked alongside the likes of Mat Maneri, Roscoe Mitchell, Nate Smith, Lotte Anker, Dave Binney, Wayne Krantz, Adam Rogers, and others.

In 2001 Taborn began to record under the leadership of Tim Berne, and with the Susie Ibarra trio. In the same year, he made his second recording as leader: Light Made Lighter, with Chris Lightcap on bass and Gerald Cleaver on drums. “On the strength of this recording,” wrote the Los Angeles Times, “Taborn emerges as one of the most exciting pianists to lead a band since the ascent of Matthew Shipp.” He went on to work, in 2002, with Dave Douglas, Hugh Ragin, and the Norwegian bassist Eivind Opsvik; with Marty Ehrlich in 2003; Drew Gress in 2004; and Chris Potter, from 2005. He has worked with many other musicians, including David Torn, Michael Formanek, and Tomasz Stanko, as well as with members of The Bad Plus, having grown up with that band’s drummer, Dave King, and bassist, Reid Anderson. His first solo album, Avenging Angel, was released in 2011 on ECM Records. In 2012, Taborn toured internationally with Dave Holland’s quartet, Prism.

Gerald Cleaver is a leader of a number of ensembles, Uncle June, Violet Hour and NiMbNl, and has worked alongside the likes of Joe Morris, Roscoe Mitchell, Miroslav Vitous, Yaron Herman, Ralph Alessi, Franck Amsallem, David Torn, Mario Pavoe, among others. In 2001, under the name Veil of Names, Cleaver released an album called Adjust on Fresh Sounds New Talent. Featuring Mat Maneri, Ben Monder, Andrew Bishop, Craig Taborn and Reid Anderson, the album was a nominated for Best Debut Recording by the Jazz Journalists Association. Cleaver joined the jazz faculty at the University of Michigan in 1995.