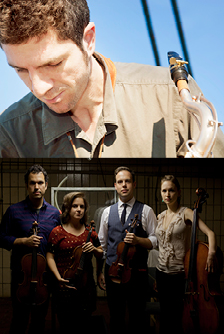 Fresh from years of touring and recording with such diverse luminaries of new music as Anthony Braxton, Julian Lage and Esperanza Spalding, Brooklyn-based saxophonist and composer Dan Blake unflinchingly breaks through boundaries in this multi-media collaboration with the celebrated Mivos Quartet. This work is an exploration of a unique sonic and visual world that integrates Blake’s idiosyncratic improvised-compositional style within an interactive 3-D animation created specifically for the evening’s performance. This work is made possible by a commission from the Jerome Fund for New Music, and further support was provided New Music USA’s Composer Assistance Program.

Saxophonist and composer Dan Blake “regards tradition as a welcoming playground best approached with a sense of wonder and adventure” (The Boston Globe). Since moving to Brooklyn in 2006, he has been at the forefront of the creative music community, producing an eclectic body of work that reaches across a wide spectrum including cutting edge multi-media works, electro-acoustic sound and noise pieces, experimental works for solo saxophone, scored compositions for chamber ensembles, several acclaimed jazz recordings. His most recent release, The Aquarian Suite (Brooklyn Jazz Underground Records), was named by the New York City Jazz Record, The San Jose Mercury News and Neue Zürcher Zeitung as among the best recordings of 2012, with the Boston Phoenix calling it “one of the most ridiculously satisfying discs we’ve heard in some time.” As a composer, his works have been recognized with support from The Jerome Fund, New Music USA, ASCAP, The Atlantic Center for the Arts, The Electronic Music Foundation, among others. Dan Blake holds a Ph.D. in composition from the Graduate Center, City University of New York, where he received the Baisley Powell Elebash Fund for an ongoing research project examining New York City’s improvised music scene.
danielblake.net

The Mivos Quartet, an “accomplished, admirably broad-minded young string quartet” (The New York Times), is devoted to performing the works of contemporary composers, presenting new music to diverse audiences. Since the quartet’s inception in 2008, they have performed and closely collaborated with an ever-expanding cadre of international composers who represent multiple aesthetics of contemporary classical composition. They have appeared at leading venues in New York City and have appeared on concert series including Concerti Aperitivo (Udine, Italy), HellHOT! New Music Festival (Hong Kong), Edgefest (Ann Arbor, MI), Aldeburgh Music (UK) and the Darmstadt Summer Courses for New Music (Germany).
mivosquartet.com/