Choreography: Jane Gotch in collaboration with the dancers
Dancers: Leo Gayden and Juliet Remmers
Vocalist: Juliet Remmers
Music: “Terry Riley: In C” by Bang on A Can All-Stars, and “O del mio dolce ardor” by Gluck

Through abstracted bodylines, break-dance styling, and operatic song, Jane Gotch’s Let it Fall imparts a corporeal tale of the human relationship with pain. We avoid it, swallow it, throw it, allow it, and find our beauty within it. The piece views pain not as something undesirable, but as an inroad to the hidden layers of feeling, vulnerabilities, and untapped strengths within us. Performed by break-dancer Leo Gayden and dancer and vocalist Juliet Remmers, the work unifies the artists’ diverse personal histories into a lush, sensorial saunter down the fine line between suffering and pleasure.

Our process concentrated on understanding and interpreting our artistic identities and how they have been formed by our gender, race, and cultural upbringing. This isn’t a political piece, as in we are literally addressing these issues, but because Leo and Juliet are so different, it has to be taken into account within the process. The obvious visual direction would be to play up their contrast; Leo sharp, jutting, and strong, Juliet, fluid and luxurious, but that would be placing them into stereotypical dance roles. I’m looking deeper, finding the opposing qualities in each of them. How does strong play out in Her? What does vulnerability look like in Him?

These questions have led to an investigation of the human experience of pain, and how a theatrical representation of pain compares to an actual physical, emotional, and mental experience of it. We are interested in how pain is expressed differently in a man or a woman or in one culture or another. What we have come to understand, is that pain and suffering is a life experience that crosses and unifies all cultural divisions, and ultimately is a point of reference from which to understand and interpret all that is beautiful in life.

Jane Gotch (choreographer) is originally from Omaha, NE, and graduated from The University of the Arts in Philadelphia with honors in 2000.  Her choreography has been awarded a Rocket Grant from The Andy Warhol Foundation in collaboration with The Charlotte Street Foundation and The Spencer Museum, two Inspiration Grants from The Metropolitan Arts Council of Kansas City, The Innovation in the Arts Award from UMKC’s Small Business and Development Center, and most recently The 2014 Charlotte Street Foundation’s Generative Performing Artist Award. She has danced with Myra Bazell, Netta Yerushalmy, and as an apprentice with Tere O’Conner. She has  collaborated with artists Mark Southerland, Paul Rudy, Helen Gillet, Brad Cox, and many others.

Her choreography has been presented at The Fifth Stop Open Studios (Brooklyn), The Philadelphia Fringe Festival (PA), A Modern Night at the Folly (KC), Urban Culture Project’s La Esquina and Paragraph Gallery (KC), The Lawrence Arts Center, and The Iron Factory (PA). She is a Certified GYROTONIC® and GYROKINESIS® Trainer and Pre-trainer, and has taught this system of mind-body conditioning in Israel, India, New York, and Kansas City since 2001. For more information on Jane visit: www.janegotch.com.

By creating forms that will appear to be mundane while giving glimpses into the possibility of an extensive process, Kayvon Pourazar will investigate the various purposes of concealment. Concealment as virtue, as suggested in Oscar Wilde’s quote “To reveal art and conceal the artist is art’s aim”, concealment that serves deceptive and underhanded intentions, and grey areas in between. The word underhanded itself will be a catalyst for exploring the hands as they are used to conceal. Pourazar will access his experiences as a performer and maker and observations of the ways we choose to conceal in order to control the way others experience our actions.

Kayvon Pourazar is of Persian origin, and was raised in Iran, Turkey and England. He graduated with a BFA in Dance from SUNY Purchase in 2000. He has performed in the works of Beth Gill, Levi Gonzalez, K.J. Holmes, John Jasperse Company, Donna Uchizono Company, Doug Varone and Dancers, Gwen Welliver, Jennifer Monson, Jodi Melnick, Juliana May/MAYDANCE, Yasuko Yokoshi and Wil Swanson. Pourazar’s work has been shown in New York City at The Kitchen, P.S. 122, The Cunningham Studios, Center for Performance Research, Catch, AUNTS and Dixon Place. In 2010 he received a New York Dance & Performance “Bessie” Award for Performance.

Kai Kleinbard: Creature in the City 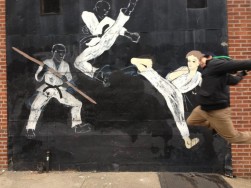 Kai Kleinbard is an AmSAT certified Alexander Technique Teacher and academic learning specialist, specializing in supporting executive functions.  He is inspired by his study of the martial arts, urban styles of dance (including popping, house and bruk-up) as well as his work with kids.  He runs the bodyLITERATE Research Initiative.  Located in Gowanus, Brooklyn, the initiative offers community based classes in emergent learning (bodyliterate.org).   Teaching and artistic information:thebodyliterate.com