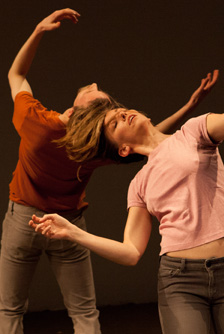 Donna Costello “You Can Always Talk About The Weather”

The sound of a rock song repeatedly drowns out Costello in the solo You Can Always Talk About The Weather, as she tries to find the impulse to get started and to deal with the raw vulnerability of being out there alone. Answering yes to everything can sometimes be the answer but will pull one into too many directions.  Abrupt switches between the taffy-like pull of the movement and the precise control of her line and focus come into play and force her inner conflicts to come out.  When the rock song finally plays through, she is in a balancing act and slowly fading away.

Donna Costello is a dance artist immersed in process rich work that blurry the lines of dance, theater, performance and the conventions that surround these art forms. As an independent dancer, she has built deep relationships dancing for Shannon Hummel/Cora Dance (founding member), jill sigman / thinkdance, Carrie Ahern, Pele Bauch, Barbara Mahler, Jimena Paz and many other inspiring artists.   In 2011, she was awarded a Space Grant at BAX where she began to offer her Rolling and Reflection (R&R) sessions that were the beginning seeds of an evening length work she is currently developing.  Her upcoming projects include performing in works by Jill Sigman, Vicky Shick and the Vagabond Inventions, as well as teaching for Brooklyn Arts Exchange, Lincoln Center Institute and the Park Avenue Armory.

Playing New York City venues from Webster Hall to The Beacon Theatre, multi-instrumentalist AJ Smith is the 2012 Songwriters Hall of Fame Scholar and Carol Bayer Sager Songwriting Scholar at NYU where he is currently earning his masters in songwriting. Currently in the process of recording their debut album, AJ & his band will be performing live at Webster Hall on Tuesday, Feb. 12 at 6:30pm.

Mina Nishimura from Tokyo, was introduced to butoh and improvisational dance under the teaching of Kota Yamazaki while studying at Merce Cunningham Studio in New York. She also danced with and influenced by Neil Greenburg, David Gordon, RoseAnne Spradlin, DD Dorvillier, Daria Fain/Phoneme Choir, Yoshiko Chuma/The Schoole of Hard Knocks and Cori Olinghouse among others.

Princess Cabbage attempts to transform abstruse texts of “Sickened Primadonna”, written by butoh pioneer Tatsumi Hijikata, that often conjures up sickened, decayed and grotesque images of body through combining nuanced movements, facial expressions and vocalization. Mina Nishimura has performed at dunaPart (Budapest) as a part of DTW’s Suitcase Fund program in 2008 and on danceWeb program at Impuls Tanz (Vienna) in 2009.Her own choreography has been presented at DTW, The Kitchen, Danspace Project, Movement Research, LIT, The Harlem Stage, Whenever Wherever Festival(Tokyo) and most recently through BAX’s AIR program.

Amber Sloan “Pulled Away”
with Jordan Morley, (and one other tbd) (all dancers)

Amber Sloan presents Pulled Away, a trio investigating the various states of instability and how they relate to the physical body in performance.

Amber Sloan is a choreographer, dancer and teacher whose work has been presented by Dixon Place, Brooklyn Arts Exchange, West End Theater, Dancenow[NYC] Festival, Dance Theater Workshop (Family Matters), Danspace Project (Food for Thought), Spoke the Hub, 92nd Street Y and others.  She has received space grants from DTW’s Outer/Space, BAX, Spoke the Hub, Mulberry Street Theater, Certain Bird in VT and a choreographic fellowship from Concord Summer Stages in MA.  As a performer, Sloan has been a member of David Parker & The Bang Group since 2002.  She serves on the board of Dance Omi and is a co-curator and producer for the EstroGenius Women in Motion dance festival.   www.ambersloan.com