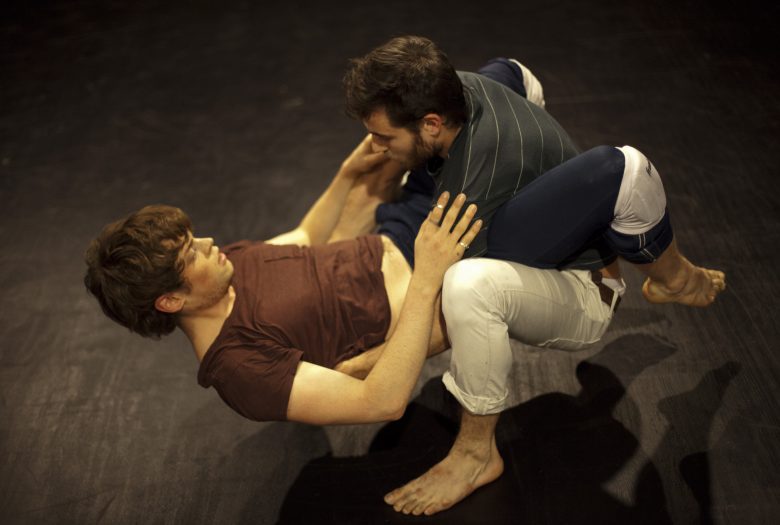 BOOMERANG is a daringly physical, poetically-nuanced dance and performance project created in 2012 by co-directors Matty Davis and Kora Radella with founding member Adrian Galvin. Recognizing the body as an evolving repository for both physical and psychological life, BOOMERANG sifts through and siphons from the rich, eclectic histories that constitute the personhoods of the people with whom they work. BOOMERANG’s work has been presented in NYC at venues including Judson Church, Center for Performance Research, Dixon Place, Triskelion Arts, the Irondale Center, and at the United Nations, as well as in Cleveland, Chicago, and Pittsburgh. They’re also keen on presenting their work in a wide variety of alternative spaces, from parks to vineyards, streets to the mountains, and amidst academic and school contexts. This past June and July, they made their European debut with performances in Berlin and Barcelona. An evening-length work in collaboration with composer/musician Greg Saunier of the band Deerhoof and commissioned by Dixon Place, will premiere in March 2016. For more information, please visit www.boomerangdance.com

KORA RADELLA is the choreographer and a co-artistic director of BOOMERANG. In addition to her work with BOOMERANG, she is the artistic director of Double-Edge Dance, whose work has been performed in cities including Aberdeen, Amsterdam, Barcelona, Brussels, Basel, Cleveland, London, and New York City. Noted for her use of “awkward grace,” she researches being on the edge of control, pushing both physical and psychological balances. Radella’s primary teaching interests include contemporary dance technique with dynamic release principles, improvisation, choreography, and movement for actors. Radella is an Assistant Professor of Dance at Kenyon College and a certified yoga teacher (500RYT).

MATTY DAVIS is a co-director and the principal performer within BOOMERANG. He is also a visual artist, jewelry-maker, and athlete. Far from the stage and studio, he has mounted guerilla-style performances in Death Valley, rural Oklahoma, and on deserted trailers in the Great Smokey Mountains. As a visual artist, he pits the body against radical undertakings and journeys that explore physicality and endurance, archetypes and personal history, and the origins of materials and mark-making. In 2015, he was selected as one of 80 international artists from nearly 30 countries to participate in Robert Wilson’s International Summer Program at the Watermill Center.  He has studied at Kenyon College, the American Dance Festival, P.A.R.T.S. in Brussels, Belgium, and is currently pursuing his MFA at the School of the Art Institute of Chicago. More information about his work can found at www.mattywdavis.com

ADRIAN GALVIN is a co-founder and dancer with BOOMERANG. He is a yoga teacher at Katonah Yoga in New York City and musician with his bands Poor Remy and Yellerkin. More information about Poor Remy can be found in their bio below. Yellerkin’s recent EP was received with critical acclaim and their music can be found via www.soundcloud.com/yellerkin. Galvin graduated from Kenyon College (2012), where he designed his own major in liberation theology and German Social Theory.

POOR REMY is a folk band comprised of Andrew D’Amico, Adrian Galvin, and Kenny Polyak. They are based in Brooklyn, New York. They released their EP Still Sleeping in 2012 and their second EP Bitters in 2013. Their music and more information about theirwork can be found at www.poorremy.com

GREG SAUNIER is best known as the drummer of acclaimed rock band Deerhoof. Since he co-founded the group in 1994, he has produced or co-produced their 13 albums, and been their most consistent songwriter. As a drummer he has performed drums onstage or on recordings with Laurie Anderson, Anthony Braxton, David Byrne, Yoko Ono, Konono No. 1, and The Flaming Lips. He is active in the free music scene in New York and has released improvisation records with Sean Lennon, Zach Hill, Joanna Newsom, and Brian Chippendale. He is a sought-after producer and remixer for other artists including Maroon 5, Xiu Xiu, Marc Ribot, and Mantra Percussion Ensemble He has composed notated works for Kronos Quartet, yMusic, Brooklyn Rider String Quartet, Ensemble Dal Niente, Ecstatic Percussion, Daan Vandewalle, Spektral Quartet, and Empire Drive-In Casio Orchestra. Saunier’s work with BOOMERANG will premiere at Dixon Place in March 2016. http://deerhoof.net/

ADAM TENDLER has been called “an exuberantly expressive pianist” who “vividly displayed his enthusiasm for every phrase” by The Los Angeles Times, a “maverick pianist” by The New Yorker, a “modern-music evangelist” by Time Out New York, and an “intrepid” pianist” who “has managed to get behind and underneath the notes, living inside the music and making poetic sense of it all,” by The Baltimore Sun, who continued, “if they gave medals for musical bravery, dexterity and perseverance, Adam Tendler would earn them all.” Since 2007, Tendler has toured with a memorized performance of John Cage’s complete Sonatas and Interludes, including a sold-out recital at the Rubin Museum and a Symphony Space festival performance on Cage’s 100th birthday listed by New York Magazine as one of the Top 10 Classical Music Events of 2012. Recognized as a leading interpreter of modern American music, Tendler is developing an album of music by Robert Palmer for his 2015 centenary, and just recorded the premiere release of Edward T. Cone’s 21 Little Preludes for piano. He lives in New York City and serves on the faculty of the Third Street Music School Settlement. www.adamtendler.com